Skip to the beginning of the images gallery
[FERNYHOUGH, Thomas.]

engaged in the Service of their Country, as well as in the New World and Africa, as on the Continent of Europe. By the Survivor. Second edition. 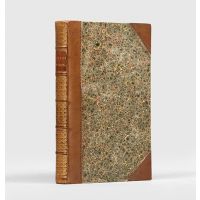 Second edition, following the first of the previous year, of this fascinating book that highlights the cost to one family of the Napoleonic Wars; both editions are extremely scarce: the list of subscribers runs to some 324 names taking 371 copies and includes the Marquis of Anglesey, Marquis of Bute, Sir William Beresford, Sir A. F. Barnard (commander of the Rifle Brigade), Sir Henry Hardinge, Robert Peel, and Walter Savage Landor and his brother Henry Eyres Landor.

Thomas Fernyhough, "the Survivor", was one of four brothers from Lichfield who all served during the Napoleonic Wars. Thomas went as an ensign with the King's Royal Rifle Corps (60th Foot) to Barbados but, like many fellow Redcoats, succumbed to the conditions and "after a short and severe service" was returned to Europe and exchanged to half-pay with the 40th Foot. His brothers Henry and John served with the Marines and were equally unfortunate. Henry "was appointed to the Argo frigate, destined to convey the Mamlouk chief, Elfi Bey, out of Egypt. but receiving an accidental hurt on the side, it brought on an abscess, which proved fatal in the twenty-first year of his age" (p. 9). John was a lieutenant with HMS Donegal but was drowned during the capture of the Spanish first rate Rayo in 1805; his journal contributing some 53 pages.

The bulk of the volume is taken up with the journals and letters of Robert Fernyhough, who also started his career with the Marines and fared better in the service. He was present at the capture of Cape Town (Battle of Blaauwberg) on 8 January 1806, a short but highly significant engagement that established British rule in South Africa, giving a vivid account of the amphibious landing in "tremendous surf". He is present at the invasion of the River Plate in 1806-7 and the disastrous Walcheren expedition (1809), of which he gives a brisk recital of the bombardment of Flushing: "If you had seen me during the action, you would have taken me for anything but an officer, for I was black as a sweep. In the middle of the conflict it became so hot, that I threw off my uniform and neck-cloth... I have scarcely been able to use my right hand since, the skin having been taken off four of my fingers, by the friction of the ropes, in working the guns; for I pulled and hauled as well as my men, not choosing to remain inactive, when the shot were flying about". In August 1810 he applied to join the 95th Rifles and was granted permission to join the first battalion, later transferring to the third. In June 1812 he embarked for the Peninsular, returning in May 1813, narrowly missing the Battle of Salamanca (22 July 1812), at which only four companies of the 95th were present. However, he does give some flavour of the battlefield: "The sabre cuts, inflicted by our cavalry upon the wounded, are frightful, some of their faces being nearly obliterated, others with dangerous cuts upon the head, arms, and legs". During the pursuit of the French, Wellington joins the Light Division, Fernyhough remarking that "his activity and exertions are astonishing, fatigue is out of the question". In an extraordinary letter he gives details of the privations he has suffered on campaign, sickness leaves him at death's door and then his unit is overrun by a group of French hussars ("they stripped me, tearing my clothes into shreds... tore a gold ring from my finger... I lay in this miserable state two days and nights"). Despite this he survives and returns to England, where he recovers. In 1819 the third battalion was stationed in Dublin and Fernyhough was put on half-pay. He died suddenly in 1828. Robert was responsible for the sketches upon which the attractive lithographs were based, perhaps reworked by another hand as in one place he describes them as "done very ill, as I was obliged to sketch them on the back of my letter, and daub them over in haste" (p. 70). These include two of the landings at Cape Town (one with Table Mountain in the background), another of that at Quilmes on the River Plate, Buenos Aries from the deck of HMS Narcissus, and the forcing of the Western Scheldt.

Lithograph frontispiece and 7 similar plates (most with tissue guards) after Robert Fernyhough.