Skip to the beginning of the images gallery
UREKLYAN, Gabriel' Arkadyevich as El-Registan & Lazar Brontman. 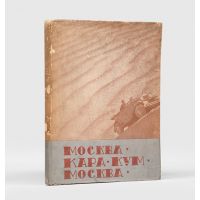 First and only edition. Uncommon, WorldCat locates just 4 copies - BL, Princeton University, Indiana University and Yale University - and a single copy of a Yiddish edition at the Center for Jewish History. "The Kara Kum (or Black Sand) desert of central Turkmenistan became, briefly, a Soviet cultural obsession when, in July 1933, a team of 23 cars from the Gor'kii and Stalin auto plants embarked on the Moscow-Kara Kum-Moscow motor rally. The front pages of Pravda and Izvestiia followed the team led by geochemist Aleksandr Fersman over the course of nearly three months and 5,800 miles as they forded streams, climbed sand dunes, and traversed the roadless "white spots" on the map of Turkmenistan. Aside from promoting the new Soviet automobile and inaugurating exploration of a largely unstudied environment, the expedition had the effect of fixing the remote Kara Kum desert of Turkmenistan in a Soviet cultural geography and installing it in the public imagination. Over the course of the following year, Kara Kum was the site of several high-profile expeditions, both scientific and cultural. The insuperable Kara Kum, "the largest sandy desert in the world," came to represent, for readers of Pravda and Izvestiia, not only a test of Soviet technology, but an ecological, economic, and cultural challenge to Soviet civilisation" (Erley, Reclaiming Native Soil: Cultural Mythologies of Soil in Russia and Its Eastern Borderlands from the 1840s to the 1930s, pp.41-2).

Events were recorded by a team of leading Soviet artists and writers; the expedition cinematographer was eventual three-time Stalin Prize winner Roman Karmen (1906-78); the party of photographers included Mikhail Prekhner, recently rediscovered and recognised as one of the outstanding practitioners of the Russian avant garde, both of whose work is represented here. The text was provided by Armenian-born, Uzbekistan-based journalist and poet El-Registan (1899-1945), co-author of the lyrics of the Soviet national anthem, and Lazar Brontman (1905-1953) subsequently the first journalist to visit the North Pole, accompanying the Soviet Arctic expedition of 1937. The brilliantly striking design scheme was entirely the work of constructivist book designer Mikhail Miloslavsky (1907-1965). Wonderful Soviet propaganda travelogue, truly uncommon thus.

Boards a little chafed at the edges, corners a touch bumped, spine crumpled head and tail with some associated chipping, pale toning to the text, jacket slightly rubbed and soiled, some scuffing at the spine, minor edge-splits, old paper tape repair/support verso, but overall very good.