Skip to the beginning of the images gallery
JACK THE RIPPER. - GRIFFITHS, Arthur, Major.

A General Survey of Wrongdoing and its Pursuit. 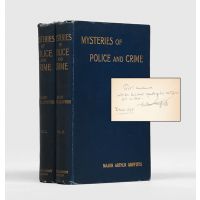 First edition, this set with a superb Jack the Ripper association. Inscribed by the author, a well-regarded prison governor and penologist, to his friend the Assistant Chief Commissioner of the Met during the "Autumn of Terror"; "Robt. Anderson, with the kindest regards of his old friend the author, Arthur Griffiths, Xmas, 1898". The work contains the first published mention of the suspects identified in the notorious Macnaghten Memorandum.

Sir Robert Anderson, (18411918), anti-Fenian spymaster and author of Sidelights on the Home-Rule Movement on which Conrad based The Secret Agent, is best remembered for his role in the Jack the Ripper case. He took over from James Warren as Assistant Chief Commissioner (CID) of the Metropolitan Police on 1 September 1888, the day after the murder of Mary Ann Nichols, the first of the canonical five. Controversially he left on holiday for Switzerland on the day of the second, Annie Chapman, a week later, and had to be summoned back urgently after the "Double Event" on the 30 September. Anderson was dismissive of the sensation that surrounded the case, "When the stolid English go in for a scare, they take leave of all moderation and common sense. If nonsense were solid, the nonsense that was talked and written about those murders would sink a Dreadnought"; contemptuous of the value of the lives of the victims who belonged "to a very small class of degraded women", and famously declared that the identity of Jack was in fact known to the investigating officers; "Undiscovered murders are rare in London, and the Jack the Ripper crimes do not fall into this category. I am almost tempted to disclose the identity of the murderer but no public benefit would result from such a course".

Arthur Griffiths (18381908) was a respected prison governor at Chatham, Millbank and Wormwood Scrubs, and became Inspector of Prisons 1878-99. He wrote extensively on penology and "was a significant analyst of the history of crime and prison discipline... producing serious pieces of research based on privileged access to original documents" (ODNB). However, his later work tended to be "both sensational and grotesque... was aimed to appeal to the ghoulish fascination with crime and punishment among the Victorian reading public". In his brief summary of the Ripper case here (I, pp. 28-9) Griffiths, a friend of both Anderson - who he describes here as "an ideal police officer, with a natural bias for the work, and endowed with gifts particularly useful in it" (I, p. 133) - and Chief Constable Melville Macnaghten, publishes for the first time the descriptions of the three suspects from Macnaghten's notorious memorandum, without, of course, naming them. A superb association copy.

Just a little rubbed, pale toning throughout, an excellent set.