Skip to the beginning of the images gallery
DOUGLAS, Sir Howard.

containing a Review and Refutation of the Principal Essays and Arguments advocating Mr. Clerk's Claims in relation to the Manoeuvre of the 12th of April, 1782; and vindicating, by Tactical Demonstration, and Numerous Authentic Documents, the Professional Skill of the British Officers chiefly concerned on that Memorable Occasion.

Naval Evolutions; A Memoir by… 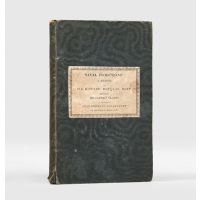 The third son of Vice-Admiral Sir Charles Douglas, Sir Howard Douglas (1776-1861) was originally intended for the Navy, but after his father's death, his guardians, without consultation, obtained a place for him at the Royal Military Academy. He was subsequently superintendent of the senior department at Sandhurst, and served with distinction as assistant quartermaster-general in Spain, and on the disastrous Walcheren Expedition. In later life he gravitated toward naval matters, his Treatise on Naval Gunnery (1820), "which went through five editions between 1820 and 1861, remained the basis of study until the late 1840s" (ODNB). The present work, which was "suggested by a conversation with his old friend and school companion Sir Walter Scott," (ibid.) is a defence of his father's claim to be the originator if the manoeuvre of "the breaking of the line." Douglas first published an article in the Quarterly Review in 1829 questioning the claims of John Clerk of Eldin, which initiated a furious controversy with Clerk's supporters, despite the fact that Clerk, who had died in 1812, had maintained in 1804 that his ideas were not fully developed at the time of the Battle of the Saints (9-12 April 1782), and that his thinking had not finally come together until the late 1790s, when he published details of the manoeuvre.

A little wear to extremities of spine, cover label lightly soiled, plates 2 and 3 bound in upside down. A very good, unopened copy, with the publisher's 16-page catalogue at the end.

Naval Evolutions; A Memoir by…