Skip to the beginning of the images gallery
ROOSEVELT, Franklin D. 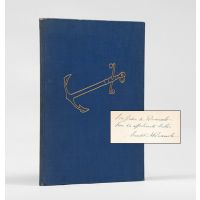 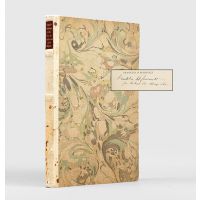 First edition, first printing, one of 1,000 copies. Presentation copy, inscribed by Roosevelt on title page, "Franklin D. Roosevelt, for Robert M. Morgenthau". Morgenthau (b.1919) is the son of Roosevelt's friend and Secretary of the Treasury during Roosevelt's presidency, Henry Morgenthau, Jr (1891-1967). At the time of presentation Robert Morgenthau, who grew up living nearby the Roosevelts, was serving as a Lt. Commander in the Navy. He would go on to serve seven years as U.S. Attorney for the Southern District of New York, followed by 34 years as District Attorney for New York County; winning nine elections to retain his post, and serving until he was 90-years old.
"In many years of collecting sketches, paintings, and engravings relating to the navy of the United States," FDR writes in his Introduction, "I had found virtually none which had connections with naval operations in the Pacific in 1846 and 1847 (during the war with Mexico). When, therefore, I had the opportunity a few years ago of acquiring the original sketchbook of Gunner William H. Myers, U.S.N., I realised its historical value". The sketchbook's original "monetary" value was 900, the highest price FDR ever paid for an item in his naval collection. Compelled to publish the "pictorial record" because of "its historical value," FDR convinced Random House of its importance, volunteered to supply an introduction, designated his secretary Missy LeHand as his liaison to the Grabhorn Press and commissioned Captain Dudley W. Knox (who had previously edited several volumes on naval history, for which FDR provided forewords) to write the text. Uncommon signed, with no other copies traced at auction.