An Anthology of British and American Verse, edited by Oscar Williams. 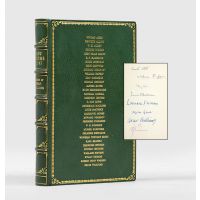 First edition, signed limited issue, one of 59 copies signed by the contributing poets, namely: Conrad Aiken, Kenneth Allott, W. H. Auden, George Barker, John Peale Bishop, R. P. Blackmur, Hugh Chisholm, Gene Derwood, Richard Eberhart, William Empson, Jean Garrigue, Horace Gregory, Alfred Hayes, Ruth Herschberger, Randall Jarrell, Robinson Jeffers, C. Day Lewis, Archibald Macleish, Louis Macneice, Marianne Moore, Howard Nemerov, Frederic Prokosch, Muriel Rukeyser, Delmore Schwartz, Winfield Townley Scott, Karl Shapiro, Theodore Spencer, Stephen Spender, Wallace Stevens, Dylan Thomas, Robert Penn Warren, and Oscar Williams. Only the Belfast-born poet W. R. Rogers is absent from the signatories (this is the case with all copies), perhaps because he was at the time troubled by his wife's emerging schizophrenia. Dylan Thomas's illustrative signature, in purple ink becoming wings and lightning bolts, is particularly notable. Five of his poems, including "And Death Shall Have No Dominion", are represented, with the other poets contributing up to six poems each. Thirty-three copies were ascribed to each of the contributors, and 26 additional lettered copies were issued for sale, all in publisher's cloth and boards. This copy, here presented in a very handsome Asprey binding, is out of series.
This was the second in a series of wartime poetry anthologies selected by Oscar Williams (1900-1964), following New Poems 1940, but is the only one for which a signed limited issue was produced. In his rousing introduction, Williams avers the especial need for poetry at that time, framed as a crossroads of civilisation, when America had just entered the Second World War: "Poetry is an unacknowledged war industry... It is a known but unmitigated error of many intelligent people to look down on poetry as if it were a feather in the hat on a stormy day, curlicues on the fringe of nothing, play for an idle moment between major issues. Hence the infinite indifference to poetry in a society badly in need of it, but offering to it, as to Christianity, a meaningless lip service... Poetry is a necessity wearing the trapping of a luxury. It is a way to live, and a way to evaluate that way. It is a way of seeing, and therefore of believing... We are living in a society recognized as fearfully complex... All our values are mixed up; we are living, as it were, in the middle of a stampede. The big mouth of the radio talks to us, whether we listen or no. We are no longer listening, because we have no way of knowing now what the truth is, or who is who. The prophet can no longer come fresh from the future dripping with knowledge. We hear a confusion of death-rattles mixed with carols, burlesque songs with prayers, sales-talks in the class room. Who can tell us the answers, who is there to believe? I have faith that the poet wanting nothing from today's society, possesses an enlightening measure of the answers. For he mirrors the pressures of the crisis, straightening the distortions, showing the body of a truth which has no stakes whatsoever in the effects itself. The poet invades society with the images of simplicity in his hand... Unlike the politician he is not trying to get elected; unlike the business man he does not have to show a profit; unlike the professional man he has no routine ethics founded on the axiom that bills must be met. He is in the position, unlike other wanderers of civilization, to offer a poem to society that it can absorb with a confidence inspired by nothing else. He is to be believed because he brings the very stuff of belief."

8 pages of poets' portraits in black and white.