Skip to the beginning of the images gallery
(BASKERVILLE, John.) 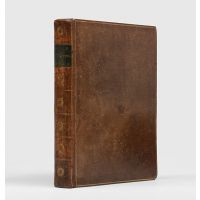 First edition of the preferred quarto, the octavo edition was published in the same year. The only book to be printed in the Greek type designed and cut by Baskerville himself; "The press made one purchase from Baskerville Savile's Greek types had become unfashionable. Baskerville had been cutting types for just five years but was sufficiently convincing for the Delegates to order 'a new Set of Greek Puncheons, matrices and moulds, in Great Primer' and three hundredweight of type. Once the type arrived in 1761, the workmen were paid to set up and print two samples for a new Greek Testament, one in the new type and the other in 'the Large Greek'. On the basis of this comparative specimens the Delegates agreed that a 'Greek Testament in Quarto and Octavo be printed on Baskerville's Letter'. However, no more type was ever bought from Baskerville" (Gadd (ed.)., The History of the Oxford University Press, I, p.222). 2000 copies of the octavo edition were printed, and just 500 of this quarto. Despite James Mosley's description of the type as a "disappointment both to printers and to classical scholars" (ODNB), this is a handsome piece of printing, the type itself demonstrative of the clarity and austerity which was to be so influential on the continent if not immediately so in Britain. Bookplate of Robert J. Hayhurst, who inherited and improved a successful group of retail pharmacies, John Hayhurst & Son, based in Nelson, Lancashire, and became an avid collector of naval history and of eighteenth-century literature in contemporary bindings; "Mr. R. J. Hayhurst believes that most pharmacists neglect one of their most valuable assets the tradition and dignity of the pharmacy. His historical sense, indeed, is no narrow one, for his feeling for the past reveals itself also in his hobbies. A collector of books, in a delightful room at his home, white-painted bookshelves stacked high on all the available wall space show to advantage the hand-tooled leather bindings of a collection that has been acquired slowly and with discrimination over the years" (The Chemist and Druggist, 7 September, 1957). Uncommon and highly attractive thus.

Bound without the half-title or initial blank.