Skip to the beginning of the images gallery
JAMES, Henry.

Notes of a Son & Brother. 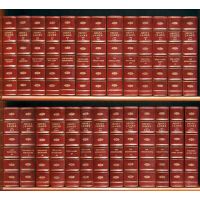 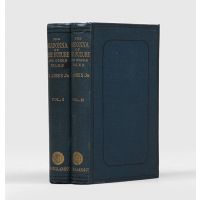 First English edition, first impression, presentation copy, inscribed by the author on the front free endpaper, "To Constance Fletcher, in faithful remembrance, Henry James, March 1914". An excellent association: Julia Constance Fletcher (1858-1938) had left America with her mother and the painter Eugene Benson and moved to Venice. Constance had a brief but memorable romantic relationship with Lord Lovelace, the son of Byron's brilliant daughter, Ada. Under the pen name George Fleming, Fletcher began early to write as a journalist and novelist. She met Oscar Wilde, whose likeness she included in her novel Mirage (1877), which she dedicated to Walter Pater. Wilde dedicated his Newdigate poem "Ravenna" (1878) to her. She knew Henry James and the novelist Constance Fenimore Woolson, in whose house in Venice James began The Aspern Papers. She wrote a number of plays, including Mrs Lessingham (1894) and a 1903 adaptation of Kipling's The Light That Failed.
"James set to work... on what was initially conceived, following conversations with William's widow, as a single family book dealing mainly with William. The project became first A Small Boy and Others (1913), a richly associative and imaginative recreation of the complicated family world in which James and his brother William had their childhood (up to James's twelfth year or so). Then in Notes of a Son and Brother (1914), making more use of family letters, James brought the account of his father and William up through adolescence and young adulthood to 1870. The difficult, self-reflexive manner of the books, their poetic interest and pleasure in the working of memory, and their constant reversion to the autobiographical make them unique in their kind. They were accorded a warm critical reception" (ODNB). The London edition of 1,250 copies was published on 13 March 1914, preceded by the New York edition published on March 7th.

Large octavo. Original dark blue smooth spine, spine lettered in gilt and with two-line gilt rules at head and tail running onto the boards in blind, edges untrimmed. Housed in a blue morocco-backed slipcase and chemise.