Skip to the beginning of the images gallery
TUPINIER, Jean Marguerite, Baron.

Translated from the French by a British Officer. 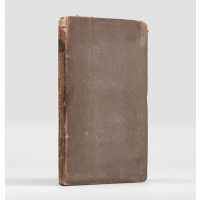 First edition in English of a French study which first appeared in the Annales Maritimes in 1822, "it was also printed by order of the French Government at the Royal press, for distribution among its own functionaries" (translator's preface). In emulation of this principle of limited distribution, a note verso of the title reads, "It is requested that none of the copies of this translation be used for purposes of publication". Uncommon, Copac shows just 7 locations, OCLC adds a further 9, mostly in the United States, all unattributed. A pencilled inscription to the title page "From Captain Wm. Jones RN" suggests that it is the work of the William Jones, who made captain in 1828, and is commemorated by a memorial at Haslar Hospital, Gosport: "'Sacred To The memory of Commodore William Jones Late Commanding Her Majesty's Ship Penelope on the West Coast of Africa, where by his judicious arrangements 115 Slave Vessels were captured and 6738 Human Beings were released from Slavery between 1st April 1844 and 12th March 1846. Unwilling to relinquish his Labours until the Energies of Life were Exhausted, he returned to Spithead on the 8th but to die in this Hospital on the 24th of May 1846 aged 54 Years. Intelligence, Zeal, and Perseverance marked the Course of his Active Life and in his Last Hours".

Tupinier's work suggests the adoption of the American system of construction, and the translator is concerned that the result would hand an advantage to the French fleet. The two-decked French ships which had originally carried 80 or 74 guns were being replaced by two new rates one of a hundred 30-pounders, and the other with 96. Their frigates, originally armed with 18-pounders, were similarly being upgraded to carry either 60 30-pounders, or 52 24-pounders. These changes strike the translator as ominous; "I presume, that there can be no question, as to the right of every country, to prepare its naval or military means of defence, upon such a scale as may not give reasonable umbrage to its neighbours. But, this new mode of naval construction, is in fact, anything but defensive ", and he signs off with the watchword "Keep foreigners from fooling us". Jones directed the work at "those whose stations, or service, entitle them to hold influential opinions on naval affairs", and he could not have chosen a more suitable recipient than Thomas Cochrane, Britain's pre-eminent exponent of frigate warfare; the man dubbed Le Loup de Mer by Napoleon; and who had just recently returned to Britain following his exploits in the wars of liberation in South America and Greece. An unusual, uncommon and interesting title with superb provenance.

Armorial bookplate of Admiral Sir Thomas Cochrane to the front pastedown. A little worn, some splitting and chipping with minor repairs to the spine, light toning, else a very good copy.