Skip to the beginning of the images gallery
DRUSKIN, Mikhail Semenovich. 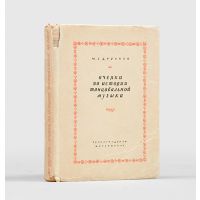 First and only edition. One of 3500 copies. Uncommon, just 14 copies on OCLC. This is the first systematic work on dance music in Russian, which includes notable early criticism of Shostakovich's ballets. Mikhail Druskin (1905-1991), Soviet musicologist, was responsible for a wide range of cultural-historical publications, also working as a broadcaster. In 1920s Druskin collaborated with Boris Astafiev (1884-1949), one of the founders of Soviet musicology, in promoting the Soviet musical avant-garde at home and abroad, Druskin himself performing piano concertos by Igor Stravinsky, Dmitri Shostakovich, Sergei Prokofiev. When, in the mid-1930s the direction of musical education in the Soviet Union turned from the avant-garde to realism, Druskin was one of the leaders of this movement, compiling a series of vivid sketches illustrating the chronology of musical trends. In the present work he offers insight into the evolution of dance music, with an entire chapter dedicated to jazz. In the 20s jazz had been the dominant form of dance music in the Soviet Union, however by 1930s it was beginning to be regarded as a deeply undesirable influence. Here Druskin argues that jazz has no place in Soviet dance halls, stressing that national motifs should be a stronger influence than jazz.
Stalin's socialism required the musical embodiment of new Soviet themes, Gliere and Kurilko's Red Poppy of 1927 is seen as the first Soviet ballet with a modern revolutionary theme. Shortly before publication, Druskin was required to revise the present text to align with the new orthodoxy with respect to Shostakovich's experimental ballets. In the early 30s the composer had been widely praised as a genius. He had created three ballets and two operas, and was working on his Symphony No. 4 when in 1936 Pravda issued editorial attacks on two of his recent works, the opera Lady Macbeth of the Mtsensk District, and the ballet The Limpid Stream. In an article on the latter, "Ballet falseness", Shostakovich was criticised for his failure to portray true socialist values, furthermore the "music is spineless. It jangles and express nothing". Druskin's revised text joined the chorus of condemnation that led to the suppression of Shostakovich's work of the period until his much later rehabilitation. An attractive and historically significant publication.

Frontispiece and 22 other plates.