Skip to the beginning of the images gallery
HORN, Robert. 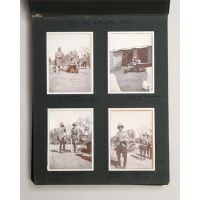 Well-kept, fully-captioned snapshot album of service with the 1st Bn. Seaforth Highlanders during the operations against the Zakka Khel afridis in the Bazar Valley, and the Mohmands on the Khyber Pass. A great number of identified portraits of fellow officers and NCOs - including Maj. The Hon. Douglas Forbes-Sempill, who died during the campaign in the storming of Halwa, and Sir James Willcocks, commanding - together with views of the camps, Walai and Chinar, forts at Ali Masjid and Shabkadr; punitive actions at Walai and Kund; jirgahs with the Afridis and Mohmands; some images of native regiments, 28th Punjabis, Khyber Rifles, Gurkhas, 54th Sikhs; an interesting group of images relating to the capture of Nahakki village around which there was fierce fighting during May, including Mohmand prisoners, searches "for hidden Rupees etc", and the "House or stable used as Officer's Mess".

From the time of the end of the Tirah campaign in 1897-8 the Zakka Khel Afridis had "remained the persistent enemies of tranquility and progress. Numerous raids in British territory were proved to have their origin in the Bazar Valley" (Nevill, Campaigns on the North West Frontier p. 331). The autumn of 1907 brought a renewal of activity, raids being carried out "with such daring that even Peshawar city itself became the scene of wholesale robbery under arms. A military expedition was then sanctioned at the beginning of February 1908, 'limited strictly to punishment of Zakka Khel, and not occupation or annexation of tribal territory' " (ibid.) An expedition was raised under the command of Major-General Sir James Willcocks. "I had at my disposal two Brigades of Infantry, with a third on the line of communications, and in reserve four Squadrons of Cavalry, one Battalion Pioneers, with an extra Battalion of Infantry as Divisional troops, two Batteries of mountain guns, and two Companies of Sappers and Miners" (Willcocks, The Romance of Soldiering and Sport). The expedition was swiftly and efficiently successful. "From the first I made up my mind to move so quickly that the Afridis would be taken unawares The Afridis were quite dumbfounded by our rapid movement, and in twenty-four hours we had practically decided their fate. Owing to the fact that no other Afridi clan joined them... and the Mohmand Lashkars arrived too late, they stood no chance against the highly trained Division under my command. They never got a look in, and within a fortnight, what Punch did us the great honour of calling 'Willcocks' weekend War' was over and we were back in Peshawar." Willcocks was sent a telegram by the king himself congratulating him on the skill with which the operations had been carried forward and on "the bravery and good conduct of the troops, which I consider has been beyond all praise". The cheaply-won peace was but brief, however, as the Mohmand war-parties, stirred by their mullahs' demands for a jihad began the disturbances which were to lead to the necessity for the Mohmand Expedition.

Partially obliterated inscription to the front pastedown, concluding "Photos of Colonel Robert Horn in India with The Seaforths 1902 sic from his younger brother William Headdrick". Horn subsequently served with his regiment on the Western Front, Neuve Chapelle; badly wounded Festubert, May 1915; Arras 1917; killed in action April 1918 at Scherpenberg.

A little rubbed, some of the images a little faded, but the majority with decent tone and definition, overall very good.