Skip to the beginning of the images gallery
(WORLD WAR II; US ARMY.) 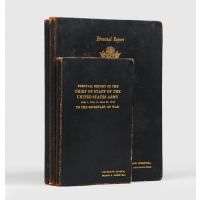 Superbly provenanced complete set of the original handsomely-produced official US Army wartime reports, the personal copies of General Brehon Burke Somervell (1892-1955), George Marshall's commander of Services of Supply, the first two being presentation copies from Marshall, the cover of each volume gilt lettered with Somervell's name and rank. Services of Supply was one of the three "superagencies" organized by the US Army after the United States's entry into the war in December 1941 the other two being Army Ground Forces and Army Air Forces and gathered under its overarching aegis, Quartermaster Corps, Chemical Warfare Service, Signal Corps, Corps of Engineers, Ordnance Department, Medical Corps, and Transportation Corps. "General George C. Marshall, the army's chief of staff during World War II, held Somervell in high regard for his ability to perform monumental tasks and was willing to overlook his penchant for antagonizing others. "What he did was a miracle," said Marshall in a postwar interview. The U.S. Army in World War II was probably the best-supplied army that had ever gone to war. Much of the credit for that accomplishment goes to Somervell, who provided the "sinews of war" for a military effort that literally spanned the globe" (American National Biography). Somervell is mentioned directly by Marshall in his concluding remarks to the first volume, where he notes, "The requirements of logistics are seldom understood. The burdens they impose on the responsible military authorities are rarely appreciated. The conflicting demands of our theater commanders, of Allied sovereign powers, and of the home front, pose difficulties never before approximated in war. The necessity for a high degree of efficiency in management is evident and it has been found in the coordination of all the various supplies and administrative departments of the Army, under the command and leadership of Lt. Gen. Brehon B. Somervell).

"Published at two-year intervals, these reports provide a comprehensive picture of global war as seen from the perspective of the Chief of Staff. The first report describes the race to mobilize an unprepared country and Marshall's appeal on the eve of war for the renewal of Selective Service, a reminder of how far the U.S. Army had to come to meet the Axis challenge. The second recounts the initial defeats after Pearl Harbor and the ultimately successful efforts of the United States and its Allies to turn the tide. The final report describes the drive to victory and outlines Marshall's analysis of the reasons for the Allied triumph. Summaries give an overall view of the progress of the war, but the scholar and military professional will find most interesting Marshall's comments on such topics as technology, the "90-division gamble," the replacement system, troop morale and the citizen-soldier, and demobilization. These comments and the other material presented in the reports provide not only a fresh perspective on the myriad problems of conducting a global war at the highest levels but also renewed appreciation for the man whom Churchill appropriately called 'the organiser of victory'" (Brigadier-General John W. Mountcastle, foreword to the 1996 Center of Military History edition).

This is a set of the scarce original edition produced by the United States Government Printing Office in Washington; trade editions were also produced, by the Infantry Journal Press in the US and HMSO in Britain. The set comprises:

Biennial Report of the Chief of Staff of the United States Army, July 1, 1941, to June 30, 1943, to the Secretary of War. Octavo, pp. v, 56. 6 folding maps and 19 folding charts. Presentation copy from General George Marshall, inscribed on a preliminary blank: 'To General Somervell, with appreciation and warm regard, G. Marshall".

Biennial Report of the Chief of Staff of the United States Army to the Secretary of War, July 1, 1943, to June 30, 1945, to the Secretary of War' Quarto, pp. iii, 123., bound with the supplementary Atlas of World Battle Fronts in Semimonthly Phases to August 15, 1945, pp. 101. Presentation copy from General George Marshall, inscribed on a preliminary blank: "Dear Somervell - Please accept this copy of my final report as Chief of Staff, with appreciation of your tremendous service to the army and support of me, with my affectionate regards G. Marshall, October 5, 1945".

Report by the Supreme Commander to the Combined Chiefs of Staff on the Operations in Europe of the Allied Expeditionary Force, 6 June 1944 to 8 May 1945. Quarto, pp. x, 123. Several colour maps.