Skip to the beginning of the images gallery
RUSSELL, Bertrand.

(Extracted from the Proceedings of the London Mathematical Society, Ser. 2, Vol. 4, Part 1.) 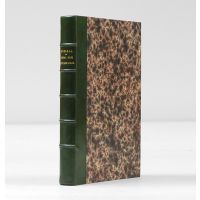 History of the World in Epitome. (For use in Martian infant schools).

On the Relations of Universals and Particulars.

Original offprint, presentation copy, inscribed by the author in the upper margin of the first leaf, "James Ward from B.R." and with Ward's pencil annotations throughout. James Ward, philosopher and psychologist, was made a fellow of Trinity College, Cambridge, in 1875, and in 1897 was appointed to the newly founded professorship of mental philosophy and logic. "During the First World War, Ward protested at the dismissal of Bertrand Russell - who later called Ward 'my chief teacher' - from his Trinity lectureship" (ODNB).
Russell had been working on trying to articulate "a theory of logic in which there were no classes, or denoting concepts, or even propositional functions, but only complex entities called 'propositions', which were to be analysed into their constituents: individuals and predicates. 'It seems to me broadly possible', he wrote to G. E. Moore on 25 October 1905, 'to maintain that there is nothing complex except propositions.' On 14 December he read to the London Mathematical Society a paper called 'On some difficulties in the theory of transfinite numbers and order types', in which he first publicly suggested the 'no classes' approach to the Paradox. Soon afterwards, the idea that 'propositions' rather than 'classes' should be the primitive notion of his theory of logic was developed into what he called the 'substantiation theory', which he first outlined in an unpublished paper called 'On Substitution'. The theory had something of the beautiful simplicity of the first draft of The Principles of Mathematics, and Russell was, temporarily, quite delighted by it. On the first day of the new year of 1906, he felt able to declare to Lucy Donnelly that: 'My work during 1905 was certainly better in quality and quantity than any I have done in a year before, unless perhaps in 1900. The difficulty which I came upon in 1901 has come out at last, completely and finally, so far as I can judge '" (Monk, p. 185).

History of the World in Epitome. (For use in Martian infant schools).

On the Relations of Universals and Particulars.