Skip to the beginning of the images gallery
BABBAGE, Charles. 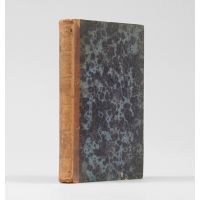 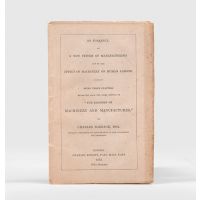 On currency, on a new system of manufacturing and on the effect of machinery on human labour.

Third edition, revised and enlarged, presentation copy, inscribed by the author on the initial blank, "Pascoe Grenfel sic Esqre with the Authors Compliments". Shortly after receipt Grenfell has added underneath, "Given to my dear Daughter Charlotte Maria March 1833 Pascoe Grenfell".
The industrialist and politician Pascoe Grenfell (1761-1838) made his name alongside his father and uncle as a merchant and dealer in tin and copper ores; the family firm Pascoe Grenfell & Sons remained a major copper producer for most of the 19th century. He served as MP for Great Marlow, Buckinghamshire (1802-20) and MP for Penryn in his native Cornwall (1820-26), associating himself in the Commons with the Grenville party and with the abolitionists. "Recognized as an expert on financial matters Grenfell was instrumental in the introduction of the periodical publication of accounts by the Bank of England, of which he was a vigilant observer. He was also governor of the Royal Exchange Assurance Company and a commissioner of the lieutenancy for London" (ODNB).
Charlotte Maria French (1812-1860) was one of Grenfell's eleven daughters with his second wife Georgiana St Leger. Through her sister Fanny and brother-in-law Charles Kingsley, Charlotte was introduced to the historian James Anthony Froude (1818-1894), whom she married in 1849. "Spirited and with strong intellectual interests, Charlotte had infuriated her brother-in-law Kingsley both by her interest in Catholicism and her fondness for Spinoza her critical annotations on her copy of The Nemesis of Faith by Froude, published in 1849 suggest that she was far from intellectually docile. She and her husband began to write together, and Froude expected in the spring of 1850 that a jointly authored work would shortly appear in print" (Brady, p. 167). Another of Froude's biographers describes Charlotte as the "most intellectual" of the Grenfell sisters (Markus, p. 50). She inspired Kingsley's heroine Argemone in his novel Yeast (1848).
An elemental work in the eventual development of all computational devices, On the Economy of Machinery and Manufactures (first and second editions 1832) was Babbage's most successful lifetime publication. It is considered "a turning point in economic writing and firmly established Babbage as a leading authority of the industrial movement" (ODNB). Prompted by the demands for precision in the construction of his first calculating engine, Babbage had made a conscientious and detailed survey of factories and workshops both in England and Europe. An encyclopaedic record of craft, manufacturing, and industrial processes, as well as an analysis of the domestic organization of factories, the work demonstrates Babbage's remarkable prescience. He proposed many scientific management techniques for the first time, including subdivided work, cost accounting, and merit pay systems. He advocated the decimalization of currency, foresaw the role of tidal power as an energy source, and predicted the exhaustion of coal reserves. "The book is at once a hymn to the machine, an analysis of the development of machine-based production in the factory, and a discussion of social relations in industry It was at once translated into French and German, both translations being published in 1833. Throughout the civilized world the book had much effect, becoming the 'locus classicus' of the discussion of machinery and manufacturing" (Hyman, pp. 103; 122). The preface to the third edition is dated 11 February 1833.

On currency, on a new system of manufacturing and on the effect of machinery on human labour.