Skip to the beginning of the images gallery
KHANYKOV, Nikolay Vladimirovich. 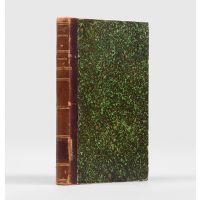 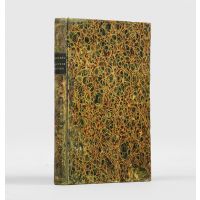 First and only edition, decidedly uncommon, A classic of the literature of the Great Game, essentially an intelligence report towards Russia's strategic ambitions in present day Uzbekistan, it is considered the first attempt at a scientific description of the Khanate of Bukhara.

The author was the noted Russian orientalist, historian and diplomat Nikolay Khanykov (1819-1878) and the report is based on his experiences during Colonel Konstantin Butenev's 1841-2 embassy to Bukhara. The mission was organised as a response to a request of the Bukhara's Khan, Nasrullah, for the dispatch of a geological officer "for the investigation of local ores and location of metals and precious stones". While the embassy was in Bukhara, Butenev negotiated for the release of British intelligence officers Arthur Conolly and Charles Stoddart who had been detained there. Despite making contact with Stoddart, and obtaining some detail from him of both his reconnaissance of the region and the conditions of the prisoners' captivity, Butenev failed to obtain the British officers's freedom, and they were murdered soon after the Russian delegation left Bukhara.

The book offers a detailed survey of the khanate; the last chapter giving a biographical overview of the life and struggle for power of Nasrullah Khan, the fifth Emir of Bukhara (r. 1827-1860), including his portrait by Lev Alexandrovich Belousov (1806-1864), artist and lithographer, a graduate of the Imperial Academy of Arts who became noted his lithographs to Alexander Viskovatov's "Collection of uniforms of the Russian Army" (1830); "Historical Description of Uniforms and Arms of the Russian Troops" (1841-1862), and others; the volume concludes with a supplementary alphabetical index of place names in Russian and Arabic. The lithographed map shows the then current borders of the Khanate of Bukhara and its immediate neighbours, and the meticulous plan of Bukhara accurately locates over 80 key buildings and other structures, in itself a remarkable document of the city in the early mid-century.
Widely considered to be "the most valuable achievement in pre-Revolutionary Central Asian studies before the annexation of the region by Russia Khanykov, who stayed in Bukhara for eight months in 1841-2 as a member of a Russian mission, observed the city of Bukhara for the purpose of "systematic description". He left valuable records, which are brief and to the point, of Bukhara's city gates, its area, graveyards, fountains, ark (citadel), jails, mosques, madrasas (including the number of rooms and students and the value of scholarships), caravanserais (including charges), public baths, tim (arcades of shops), the structure of houses, the permanent bazaar, suburban weekly fairs, feasts (festivals), mausolea, population (estimated as 60,000-70,000), trade with neighbouring countries and cities (Russia, Khiva, Mashhad, Kabul, Khokand, Kashgar, Yarkand), prices of goods, the machinery of governments, the ulama, the isan (Sufi spiritual masters), and the academic situation Though the descriptions of Samarkand and Karshi are superficial, Khanykov's record of nineteenth-century Bukhara is meticulous and well deserves the praise accorded it by later scholars such as V.V. Bartol'd and O.A. Sukhareva" (Henda & Miura (eds.), Islamic Urban Studies: Historical Review and Perspectives, p. 282).

Nikolay Khanykov (1819-78) graduated as an interpreter in oriental languages from the Imperial Lycée at Tsarkoye Selo in 1836, and in this capacity took part in Perovsky's ill-fated military expedition to Khiva of 1839-1840. Following his participation in the present expedition he joined the diplomatic office of the Main Administration of the Transcaucasian Krai and continued his ethnographic researches; his writings included On Muridism and the Murids, A Translation of Muslim Decrees on War, and On the Alternating Changes in the Level of the Caspian Sea. Between 1850 and 1855, Khanykov served as one of the directors of the newly organised Caucasus section of the Russian Geographic Society; from 1854 to 1857 he was consul general in Tabriz; and in 18589 he led a scientific expedition to Khorasan. From 1860, Khanykov lived mainly in Paris where he was close to Ivan Turgenev, moving in the circles of Russian revolutionary émigrés surrounding Alexander Herzen, whose papers and letters he helped preserve. Khanykov wrote two books about his exploration of Khorasan; one of these, Mémoire sur la partie méridionale de l'Asie centrale (first published in French in 1861, and not in Russian until 1973), was awarded the Grande Médaille d'Or of the Société de géographie. The present work was Khanykov's first published book, it was subsequently translated into English - as Bokhara: its Amir and its People, 1845 - French and German. WorldCat cites just 9 locations of the present edition among international institutional libraries.

Lithographic portrait and 2 folding lithographic maps at rear, a regional map and a city plan of Bukhara.

A little rubbed at the extremities, pale toning to the text-block, some neat professional repairs verso to minor splits to the folds of the maps, but overall a very good clean copy.