Skip to the beginning of the images gallery
BICHURIN, Iakinf.

[Description of Djungaria and Eastern Turkestan ancient and modern. Translated from the Chinese.] 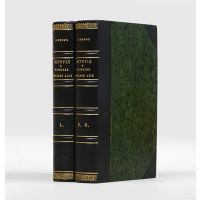 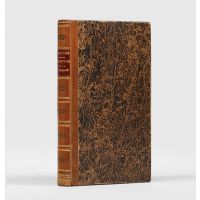 First edition, rare, of this pioneering description of Central Asia by one of the founders of Russian sinology, Iakinf Bichurin (1777-1853); it gathers three Chinese texts in their first European translation. The region covered corresponds to northwest China and Central Asia, comprising East Turkestan and Dzungaria, the latter bounded by the Tan Shan mountain range to the south and the Altai Mountains to the north. No copy traced and it appears to have eluded the great French sinologist Henri Cordier.

The Chinese sources cover the history and contemporary condition of the so-called "Western Lands", corresponding to modern Xinjiang or Uyghur Autonomous Region of China. The book describes the ancient history of the "Western Lands" from the second century BC and is based on three original Chinese works: "Se yu chuen" ("Narration about the Western Lands"), a portion of the "Tscen Han shoo" (The Book of Han), by the first century AD historian Ban Gu and "Se yu vuin tzeen lŭh" ("Notes seen and heard in the Western Lands"). Iakinf's 16-page preface is followed by an alphabetic index of ancient geographical names clarifying their location at the time, a table of distances between military stations in Chinese Turkestan precedes the main text and is supplemented with extracts from various government regulations and statutes regarding the region (the settlement of Chinese exiles and criminals, duties and customs, possessions of the Turkestan princes, etc.) and genealogical lists of the princes and rulers of the lands in Eastern Turkestan. The attractive colour plates depict a Kalmyk warrior and his wife, an inhabitant of the area near Bukhara (a falconer with hooded bird on his arm) and a Turkestan girl.

Nikita Yakovievich Bichurin (1777-1853), better known by his monastic name of Iakinf or Hyacinth, was the first Russian sinologist, and the leading authority on Asia of his day. Originally a tonsured monk, he was named head of the Russian Orthodox Mission to Peking in 1807. He soon became aware of the serious dearth of knowledge about the region which was hindering missionary efforts, and so began an intensive programme of study in Chinese languages and culture. Bichurin immersed himself in the translation of Chinese classics, the compilation of dictionaries of regional languages and dialects, and wide-ranging surveys of Chinese history, religion and geography, including the first detailed descriptions of Beijing; he also created an ethnographic record covering folk customs, regional dress, and popular religious practices. He travelled extensively visiting Mongolia and Tibet, famously being the first European to produce a view of Lhasa. His published studies including Notes about Mongolia, A Description of Tibet, and a History of Tibet and Tsinghai. In 1821, after 14 years in China, Iakinf returned to Russia, where his concentration on geographical studies led to questions concerning his religious motivation. He was stripped of his title of archmandrite, and sent into exile at Valaam Monastery in Karelia, the farthest north outpost of the Orthodox Church, for four years. After his release from the monastery, in 1826, Iakinf became a translator for the Asian Department of the Ministry of Foreign Affairs. He continued his studies of China, being instrumental in the establishment of a Chinese language school in Kyakhta near the Mongolia-Russia border, and made two trips to Siberia in 1830 to 1831 and 1835 to 1837. His work as a sinologist was recognised with membership of the Academies of Science of Russia, Germany, and France.