Skip to the beginning of the images gallery
DALRYMPLE, [Alexander.] 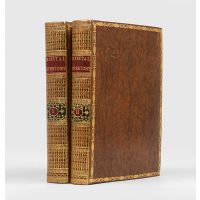 First edition, first issue, large paper copy, from the stated print-run of 250 copies only, of this valuable compilation of researches into the history, culture, topography, commerce and natural history of India, Burma, Cochinchina, and China, consisting mostly of reports, charts and translation produced by agents of the East India Company, including Dalrymple himself, nearly all previously unpublished. Copies of this bibliographically complex part-work are to be found at the expected institutions in various states of completeness, but in commerce we trace only two first-issue copies containing all text and plates (both lacking the volume II general title as here) and one such copy of the 1808 re-issue (see below).

Dalrymple (1737-1808) first travelled east as a writer to the East India Company, undertaking a number of reconnaissance voyages across the region and concluding a treaty with the Sultan of Sulu. In 1763 he returned to London and worked to promote eastern trade and Pacific exploration, and was notably passed over in favour of James Cook for the Transit of Venus expedition. In 1775 he rejoined the HEIC, for whom he "began to produce a series of charts, navigational memoirs and coastal views for the East Indies navigation, from the Mozambique Channel to China" (ODNB), and was appointed hydrographer to the Admiralty in 1795, tasked with consolidating their collection of charts and plans, dying shortly after his acrimonious dismissal in 1808. Though largely remembered today for his disputes with the HEIC and Admiralty, he "led a life exemplifying service to his country during the age of Enlightenment. His influential role in Britain's maritime history makes him an outstanding historical figure" (NMS cataloguing of his portrait). Despite the founding of the Asiatick Miscellany by Francis Gladwin in 1785, and the publication of Asiatick Researches by the Asiatic Society of Bengal, Dalrymple was justifiably confident that there was still a niche in the market. Botanist William Roxburgh offered papers on the cultivation of pepper in Travancore and a description of the indigo tree for the first number; James Rennell submitted a map of the Ava River; and Charles Wilkins permitted the first publication of a portion of his translation of the Mahabharata to appear in the second volume. Other important material, much of which Dalrymple appears to have obtained through his own researches, include one Captain George Baker's account of his embassy to Persaim (now Pathein, Burma) in 1755, "Ensign Lester's Embassy to the King of Ava, 1757" and the text of the ensuing treaty, a 1753 report on tea-growing in Canton by Frederick Pigot (probably a relative of George, twice president of the Company), and all manner of further reports, either unattributed or by various lesser-known HEIC agents, on the Hindu caste system, Tipu Sultan, the Nair princes of the Malabar coast, "Some account of Cohin-China, by Mr. Robert Kirsop", cities such as Jaipur and Agra, imports and exports to and from Macao, Canton, and Japan, and similar subjects.

Publication of the journal was patchy: the first volume comprised four numbers published at irregular intervals between 1791 and 1793; the second of a further four, two issued in 1794, another in 1795 and the fourth in 1797, when Dalrymple's stamina seems to have failed in the face of increasing pressure of work from the Admiralty, to which he had been appointed chief hydrographer in 1795. A ninth part was mooted, to include the index for the second volume, but it was not issued until 1808, when the remaining sheets were bound up with new title pages. The British Library sets are both made up with volumes from the later issue. Dalrymple explains in his introduction to the first number that 100 of the 250 copies printed were to be held by the East India Company against a contribution of 200, 50 were for presentation to contributors, and 100 for sale, before adding that "of the early number I shall print 500 copies, 250 being at my own charge" should demand exceed 100 copies, though his general introduction for the first volume as a whole, issued on completion of the constituent four numbers, explains that the HEIC only took 64 copies, leaving him short of funds. He appears never to have issued the promised index leaves for the second volume. In his general introduction to the first volume, Dalrymple qualifies his frustration with the "retrospective satisfaction of having preserved many papers, which would otherwise, probably for ever, have been lost to the world".