Skip to the beginning of the images gallery
BRADBURY, Ray. 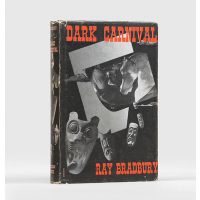 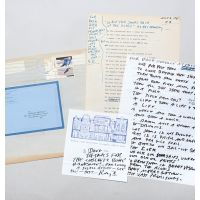 Two manuscript poems, inscribed: "So Run the Sands Back up the Glass" and "The East is Up".

A wonderful original manuscript poem by Ray Bradbury, showing one of the great imaginations of American science fiction engaging directly and in real time with a major event in space exploration.
In mid-June 1976, Ray Bradbury, author of the Martian Chronicles (1950), was invited to the Disney projection room in Hollywood to witness the Viking 1 spacecraft entering Martian orbit, as the first of two Viking ships sent by NASA to retrieve data and assess the possibility of their being life on the planet. Though there had been earlier attempts by both the Americans and Soviets, the Viking 1 lander, which it touched down on 20 July, was the second to achieve a soft-touchdown, and the first to send back useful data (the Soviets' Mars 3 of 1971 had stopped transmitting after 14.5 seconds).
The poem, drafted in loose iambics, is a rousing paean celebrating the human quest for knowledge and the search for life. It was published in the LA Times on 27 June 1976, and also in a Bradbury special issue of Xenophile in September 1976. The original Times version differed in several notable ways from the present manuscript, significantly at the end where it omits the entire last page here, in which Bradbury paraphrases the most famous of John Donne's devotional sermons: "Send not to ask why Viking Lander must touch Mars, and chart it true, the Viking flies for all, but lands for you!!". The present manuscript is not a later fair copy, but clearly the original draft composed live while witnessing the event, as attested by the many drafting corrections but also Bradbury's inscriptions on the first page in various coloured inks: "Ray Bradbury, written on Thursday, June 1976, 10:30 to 10:37 AM, taken to Times at 12:30 that morn", and again, "Written in Disney projection room! R.B.". It may be that the final page with the Donne paraphrase was added by Bradbury as an afterthought, since the LA Times version, published immediately following the event, lacks these lines, but the Xenophile version of September has them. Bradbury finally inscribed the manuscript as a gift to his friend and fellow writer Bruce Francis, "And now - for Bruce Francis with love from R.B., Oct. 6, 1978", and posted it to him in the present envelope.
On 22 August 2012 (which would have been his 92nd birthday), Bradbury's place in the history of Martian exploration was affirmed when the team behind NASA's Curiosity rover named its landing spot after him, tweeting: "In tribute, I dedicate my landing spot on Mars to you, Ray Bradbury. Greetings from Bradbury Landing!".

Excellent condition, only the mailing envelope lightly toned and marked and with a few tears.

Two manuscript poems, inscribed: "So Run the Sands Back up the Glass" and "The East is Up".