Skip to the beginning of the images gallery
WORTH, Thomas. 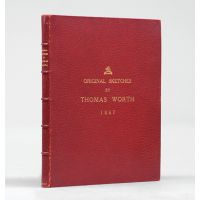 "These sketches were drawn by Thomas Worth who was on board the yacht Evelyn at the time she made the cruise with the New York Yacht Club about 1867. Those on board were E.E., Holley owner, Mr. Amos Stellenwerf, Mr. Dan Slote, Mr. Chas. Van Zant, and the Artist. The accompanying sketches were actual incidents of the cruise. Three sketches are scenes in the Great South Bay Long Island on board the Evelyn."

Superbly rendered and witty visual record of the misadventures of a party of New Yorkers afloat with the New York Yacht Club on their annual competitive cruise, documenting the moment when the old keen, but gentlemanly, spirit of competition began to shade over into more intense, professionalized rivalries. Our yachtsmen seem to be very much of the old school, where a plentiful supply of good liquor - Holley breakfasts on gin and tansy - and good fellowship are essential to the enterprise. The "skipper", Edgar E. Holley, was secretary and director of a number of insurance companies, described on his death in 1887 by the London American Register as "a veteran fireman, and one of the most popular men in the fire insurance interests"; among his guests were Amos Gardener Stellenwerf, proprietor of the Lake House Hotel, a resort at East Islip, Long Island, who was also Worth's brother-in-law; and Dan Slote, a New York stationery manufacturer, who was Mark Twain's roommate in the Quaker City on the voyage which formed the basis of Innocents Abroad, and with whom Twain struck up a friendship until a serious - seemingly inevitable - falling out over some business ventures into which he had plunged "with his customary enthusiasm", only to find himself being "bled" by Slote (see Mark Twain's Notebooks & Journals, II, 1877-83, pp.352-3). Other yachting notables who participated in the cruise, and receive humorous mentions are James Gordon "Jim" Bennett, at the time Commodore of the NYYC, and his schooner yacht Henrietta, in which Bennett had just won the first recorded transatlantic yacht race initiating the new era of escalating personal feuds, and shipyard experimentation in the search of competitive advancement; shipbuilder and inventor Richard F. Loper and his yacht Palmer, during the Civil War Loper had been appointed assistant agent to the War Department with responsibility for procuring troop transports; and Capt. Henry Haff, captain for Thomas W. Lawson, controversial Boston "copper baron" and stockbroker, and historian of the America's Cup.

Little known today, Thomas B. Worth (1834-1917) was one of America's most prolific comic illustrators of the nineteenth century, "a comic and genre artist, he sold his first comic sketch to Nathaniel Currier in 1855, and later became one of the most popular of the artists whose work was lithographed by Currier & Ives" (Groce & Wallace, Who Was Who in American Art). For them he specialised in equestrian and other sporting scenes, but was also behind the publisher's extraordinarily successful, and extraordinarily racist, "Darktown" series, one of these lithographs of crude African-American stereotypes reputedly selling 73,000 copies. He was never an full-time employee of Currier & Ives, also publishing in various of Harper's titles - the masthead of Harper's Weekly is signed with his "TW" monogram - and many of the plethora of popular humorous and topical magazines of the time, such as Puck, and Frank Tousey's Judge, also providing the illustrations for Harper's Household Edition of Dickens's Old Curiosity Shop. Worth was strictly a commercial artist, his work produced on commission from publishers, and consequently his original artwork is rarely encountered on the market, when it does appear it is keenly contested for. This is an exceptional piece, more or less representing the substance for an illustrated book or series of journal articles. While Worth worked mainly in a humorous vein, these drawings, while they are very much within that genre, also offer highly detailed images of the yacht Evelyn, on deck, below deck, and at sea, and some very lively and only lightly caricatured portraits of our yachtsmen providing a spirited visual record of the yachting world in a bygone era.

36 pen and ink drawings, and 3 with watercolour and wash, on highly-polished wove paper with a pale blueish tone.

Slightly rubbed at the extremities, front joint more so and starting towards the tail, headcap chipped, tan-burn to the free endpapers from the turn-ins, slight yellowing at the margins, overall very good.