Skip to the beginning of the images gallery
(CHINA.) 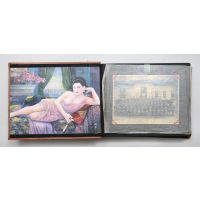 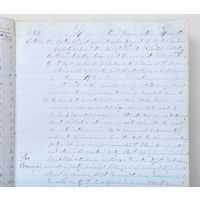 Wonderfully engaging, wide-ranging and extensively-captioned visual record of China as seen through the eyes of a soldier in the US 15th Infantry Regiment ("The Old China Hands"), based in Tientsin (Tianjin) between 1929 and 1932, a period of bloody turbulence in China.

This enthralling album encompasses many aspects of China, from the well-documented street life that always fascinated the visiting Westerner (peddlers, barbers, gamblers, shoemakers, the deformed bound "lotus feet" of Chinese women, decapitated heads of criminals hung from lamp posts) to personal photographs of ice skating on frozen canals, temples, funerals, graves, pagodas, statues of the Buddha, sampans and junks, the famous Marble Boat (also known as the Boat of Purity and Ease, a lakeside pavilion situated in the grounds of the Summer Palace in Beijing), and, naturally, the Great Wall. Towards the end of the album there is a fine series of some 100 candid smaller images (measuring 60 x 60 mm) taken in and around Beijing (clearly photographed in the winter as infantrymen are pictured wearing fur hats and greatcoats) showing the astrolabe at the Ancient Observatory (Guguanxiangtai), scenes in the complex of the Forbidden City and on the Sacred Road leading to the Ming Tombs (two figures are shown with cameras, one a fellow soldier and another bearing some resemblance to the celebrated Swedish Sinologist Sven Hedin).

At this time Tientsin (Tianjin) was divided into "concession territories": through an agreement with the Qing dynasty, Japan, Britain, the US, and a number of European powers (France, Germany, Belgium, Russia, Italy, Austria-Hungary) administered different sections of the city. This process had begun in 1860 with concessions to Britain and France and led to the rapid development of Tientsin over the next half century.

The US 15th Infantry were originally stationed in Tientsin (Tianjin) in 1900, during the Boxer Rebellion, and served there until March 1938. This long service gave rise to their nickname of "The Old China Hands" and the adoption of the Chinese dragon on the unit insignia. During this period of ceaseless turmoil in China the regiment provided protection against marauding bandits and warlord armies vying for control; the Chinese Memorial Gate (pictured here and now at Fort Benning, Georgia) was presented to the regiment in 1925 by local villages, in gratitude for the vital security role played by the 15th in combatting the invading army of warlord Feng Yuxiang. During this period the north east of China was affected by the brief but bloody Sino-Soviet Conflict of July-September 1929 for control of the strategically important Chinese Eastern Railway and the Tientsin Incident of 1931, when the Kwantung Army of Japan, acting independently, invaded Manchuria and established the puppet state of Manchukuo. Four photographs entitled "The War of Tientsin in Pictures" shows barricaded and sandbagged streets in the city. There is also a sequence of twelve images of the "Shanghai War", showing both Japanese and Chinese soldiers (some manning the Great Wall): this relates to the Shanghai or January 28 Incident of 1932, instigated by the Japanese bombing of Shanghai and the subsequent armed conflict. The album opens with a fine formal photograph of G Company (under the command of Captain S. C. Robertson) and there are, scattered throughout the volume, images of the unit on parade, at the rifle range, mounting guard duty (including "comedy guard"), on training exercises ("wall scaling", "wire laying", "rickshaw racing"), the "Can Do" week of events celebrating the unit's motto, "recreation park stands during ball game between Japanese and Chinese civilians", and many images of identified fellow "doughboys". There are glimpses of the veteran USAT (US Army Transport) ships "Thomas" and "Grant" and scenes from the 15th's journey out to China at San Francisco, Honolulu, Guam, and the US military airfield at Nichols Field in the Philippines. Another aspect of a soldier's life overseas is "hidden" beneath a colour illustration of Beijing's Nine Dragon Screen: the names of some 13 "floozies" with names such as "Rosie Hot Pants", "The Merry Widow" and "Cock Eye" and personal attributes ranging from "Dirty Neck" to "Good Looking". Soldiers from the other "concession territories" of Tientsin (Italy, France, and Britain) are also captured, along with some fine snapshots of American and Chinese soldiers fraternizing (these are dated 29 and 30 May 1929). Loosely inserted are two attractively-produced menu cards: for Christmas 1930 (with an original photo postcard of Company G on the cover) and Thanksgiving 1931 (Company F). The compiler of this album may have been Private Rudolph M. Bergner: there is a small pencil mark next to his name in the Christmas 1930 menu card and his name also appears in the Company F Thanksgiving menu.

A fascinating archive of both original and commercial photographs that gives an engrossing view from the perspective of a serving soldier during a period of violent upheaval and historic change in modern China: a period that foreshadowed the gathering storm of the Second World War.