Skip to the beginning of the images gallery
(WORLD WAR II; Japan.) 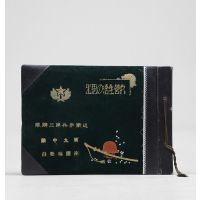 Superb personal photo album portraying the training of a Japanese infantry officer cadet at the junior division of the Rikugun Yonen Gakko - Imperial Japanese Army Academy - at Asaka in Saitama province, at the outset of World War II. Images show his family and friends; his well-appointed room with stacked arms; group portraits of cadets; the buildings on campus and locally, interiors of a mess hall, lecture theatre, and of a barrack-room; parades, and drill on the drill square; training exercises with firehoses and with howitzers, and attack training under live fire with smoke drifting across the parade ground; jukenjitsu or kendo-style bayonet training; sumo wrestling, and a traditional dance performance. A highly evocative visual document, which is further enhanced by the fact that is has the marks of having been captured and passed as legitimate "loot" with the ink-stamp "Examined in the field passed by Joint Intelligence". It was taken by U.S. Marine Sergeant, Michael Kolesar, of Ironwood, Michigan, serving with A Co., 6th Tank Battalion, 6th Marine Division and has his ownership inscription to the front free endpaper, datelined Okinawa, April, 1945. The 6th Marine Division was the only U.S. Marine Division formed and disbanded overseas, never setting foot as a Division in the United States. It was formed on Guadalcanal in the Solomon Islands in September 1944, composed of the 4th, 22nd, and 29th Marines, and assorted Engineering, Medical, Tank, Headquarters, and service battalions. They landed on Okinawa, 1 April 1945, as part of III Amphibious Corps, swept through the northern Ishikawa Isthmus, and then engaged in heavy fighting against the Shuri Line located in hills honeycombed with caves and passages across the southern Coastline, fighting for over a week, and then advanced through Naha. Kolesar's tank battalion was involved in the campaign through Naha, and then the Oroku peninsula, sustaining heavy losses. For its part in an operation which came to be known as the "Typhoon of Steel" for the sheer intensity of the fighting, the 6th received a Presidential Unit Citation for "extraordinary heroism in action". The Division was prepared for the invasion of Japan which never took place, so they were sent to Tsingtao, China in October, 1945, disbanding in April 1946. Kolesar was evidently back home before the unit reached China, the Ironwood Daily Globe of 24 October 1945 recording his presentation of a Japanese rifle that he had brought back as a trophy to the local Conservation Club, he evidently retained possession of this attractive and fascinating album.

Landscape quarto (215 x 282 mm). Original silk cord-backed album of black half morocco-grained cloth, bottle green velvet boards, the front deeply stamped with title in gilt together with Japanese Army Cadet insignia of a star within wreath, and motif of a steel helmet in red with gilt katana in a flurry of cherry blossom petals.

Title page with "calligraphic inscription" extolling the five codes of the Imperial Precepts to Soldiers and Sailors - Loyalty, Propriety, Valour, Fai8thfulness and Righteousness, and Valour - 75 original photographs of various formats - ranging from 100

A little rubbed at the extremities, but overall very good.