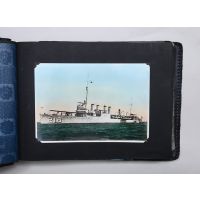 A highly evocative album containing over 300 photographs, both personal and from commercial studios, recording the active service of the USS Parrott (DD-218) on the China Station with the Asiatic Fleet - part of Destroyer Division 58 - including the Asiatic neutrality patrol in 1935 and 1936, offering a wealth of images of China, Japan, the Philippines, and the South Pacific on the eve of the Second Sino-Japanese War (July 7 1937 - September 9 1945) and World War II. Studio photographs include a number from the renowned commercial photographers Afong (based in Yantai, formerly Chefoo), Joseffa, and Skvirsky, both established in Shanghai.

It was compiled by Yeoman 2nd Class (E-5) Charles Edmond Berry and opens with two fine photographs of the officers and crew of the Parrott on deck, two colour-tinted photographs showing the ship at anchor and a humorous pictorial advertising photo from the Afong studio (including an image of the studio exterior) - clearly issued to all ships passing through Yantai - and featuring the Parrott at the centre. There follows an often joyful evocation of life onboard a US Navy destroyer prior to World War II, with photos of the "after" parties at the famed Beach Cafe in Chefoo which featured White Russian "hostesses" and tremendous amounts of alcohol, as well as the morning-after breakfasts. Berry has also included panoramic photos of the Asiatic fleet in harbour at Chefoo (Yantai) and Hong Kong, even including a humorous photographic pictorial "Bootlegger's Map of the United States." There are a series of photos showing the other U.S. Navy Clemson-class destroyers on station with the Parrott (the USS Pillsbury, USS Bulmer, USS John D. Ford, USS Paul Jones, USS Smith Thompson, and USS Pope), as well as various shipboard shenanigans, baseball games, battleships and destroyers on maneuvers, gunnery practice, loading of shells, crew pets, Liberty parties, sailors carousing down the Bund in Shanghai, buying souvenirs in Cuba, sailing through the Panama Canal, sightseeing trips to a walled city in Northern China, the Great Wall of China, cremation ceremonies in Bali, riding rickshaws, snake charmers, and more. There are photos of Pan American Airways flying boats landing and unloading passengers in China, many street scenes in Shanghai, Hong Kong, Tsing Tao (Qingdao, including the beheading of Chinese robbers outside the town), Peking, and Singapore. Of special interest are the series of photos showing Chinese Naval Ships from the Republic of China Navy in the mid-1930s, including the CNS Yixian (sunk by Japanese aircraft in September 1937); CNS Yisheng, which had been converted into a gunboat in 1928 (later sunk), the CNS Shin Shey (built in 1911, converted to a gunboat in 1929, sunk in 1938) and many others. There are also images of Kobe, Yokohama, street cars in Shanghai, parks in Tokyo, street scenes in Kyoto and views of the temples there.

The USS Parrott (DD-218) was a Clemson-class destroyer laid down by William Cramp & Sons, Philadelphia, and launched in 1919, commissioned in 1920 with a complement of 157 officers and enlisted men. The Parrott spent most of her career sailing with the Asiatic Fleet, was awarded the Yangztze Service Medal (in part for humanitarian assistance during the flooding of 1931-32), operating through the Chinese Civil War (which resulted in considerable naval activity in Chinese waters), collecting hydrographic data in and around Saigon (then French Indochina) in 1935. By 1940 she had served successively as station ship at Amoy (Xiamen) and Swatow (Shantou), China. From 7 July to 4 October, she patrolled China waters based at Tsing Tao (Qingdao) and then made calls to other northern Chinese ports, returning to Manila on 11 October. At Manilla, in the early months of 1941, she was refitted with anti-mine and detection gear for anti-submarine warfare. The Parrott saw action in several theatres of war: South China Sea, Battle of the Java Sea, Atlantic Convoys, and the bombardment of Spanish Morocco. She was accidentally rammed by the SS John Morton in Norfolk Naval Shipyard in 1944 and so severely damaged that she was decommissioned that same year and saw no further active service.

An engrossing eye-witness panorama of life on board a US Navy vessel on the China Station, as seen from the perspective of a serving seaman - and set against a backdrop of the grumblings of world war.

319 corner-mounted original photographs, ranging in size from 102 x 63 mm to 292 x 240 mm (including 6 colour-tinted images), and 4 panoramas 292 x 145 mm, many studio prints captioned in the negative, often with the photographer's stamp at lower corner,

A few slight scuffs to binding, occasional creasing to the mounting leaves, very minor damage to a couple photographs, overall in excellent condition.