Skip to the beginning of the images gallery
POTTER, Beatrix.

Plays based on the published stories. 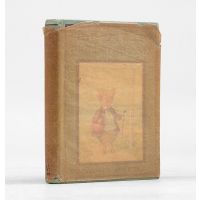 The Tale of Pigling Bland. 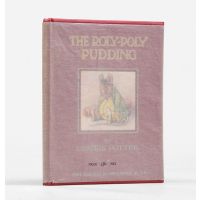 The Tale of Johnny Town-Mouse. 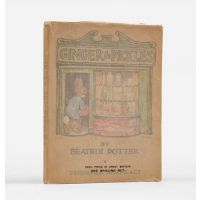 A group of six theatrical versions of Beatrix Potter stories, three titles with one or two variant issues. The Tailor and Gloucester and Ginger and Pickles were dramatized by Potter in collaboration with the character actor and director Ernest George Harcourt Williams; the others were adapted from her books without her direct involvement.

One copy of the first edition (no reference to Ginger & Pickles or Mr Samuel Whiskers), and two later issues (with the plays referenced). In October 1923 Potter received a rough draft of Williams's adaptation, requesting her permission to publish it and use the play for the children's performances he and his wife gave each Christmas. Potter made a couple of alterations, notably to the name Lady Golightly he wanted to give to one of the mice, and criticized some of the wording, and wrote severely to her publishers: "I care far more for the Tailor than for Peter... If they print a book of words I must be allowed to revise it." The play was published in 1930. Later, in response to Warne's request for a "drawing-room version", she replied "between ourselves the present version is so far mine (by quotation and corrections) that I could not write a different version if I tried." (Linder, p. 276).

One copy of the first edition (no reference to the Tailor of Gloucester or Samuel Whiskers) and two later issues (referencing those two plays).

(vii, viii) BUTTERWORTH, Theron H. Mr. Samuel Whiskers: A play in three scenes and an epilogue from the story of the Roly-Poly Pudding by Beatrix Potter. London: Frederick Warne & Co., 1933

One copy of the first edition (without reference to the Tailor of Gloucester or Ginger and Pickles plays on the inner front cover), and a later issue (referencing the plays).

Potter began to write a Peter Rabbit play (date unknown) but it was never finished.

The Tale of Pigling Bland.

The Tale of Two Bad Mice.

The Story of A Fierce Bad Rabbit.