Skip to the beginning of the images gallery
STUART-WORTLEY, Emmeline, Lady. 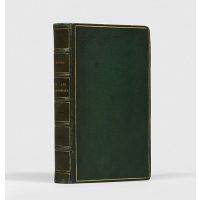 First edition of the author's first publication, fairly uncommon, around a dozen copies institutionally, but this a delightful presentation copy inscribed; "For the Marchioness of Londonderry with the Author's very Affectionate Love". Stuart-Wortley memorialised her friend, Frances Anne Vane-Stewart in verse in Fisher's Drawing Scrap-Book for 1838: "Yes! I have seen thee midst the gay and vain,/ Fairest among the courtly circle's train".

Lady Emmeline Charlotte Elizabeth Stuart-Wortley (18061855), was the second daughter of John Henry Manners, fifth duke of Rutland, her earliest poems appeared in Blackwood's Magazine and collected in this present volume. Many of her poems were composed as around her travels, such as Travelling Sketches in Rhyme (1835) and Impressions of Italy, and other Poems (1837). She was editor of the popular annual The Keepsake, 1837-40, making numerous contributions herself, and among the other contributors was Tennyson, who published his poem 'St Agnes' in the 1837 volume, later republished under the title of 'St Agnes' Eve' in the volume for 1842. "Lady Emmeline's associates also included the countess of Blessington, Theodore Hook, Richard Monckton Milnes, Caroline Norton, and Mary Shelley" (ODNB). An avid traveller from the time of her extensive European honeymoon, after the death of her husband "something of desperation entered into the increasingly punishing itineraries she set for herself" (Robinson). Her tour of American not being confined to the eastern United States, but taking in Mexico, Panama, and Peru. She died in Beirut, "afflicted with dysentery and sunstroke", having crossed and recrossed the country to Aleppo with a broken leg from a mule kick sustained near Jerusalem.