Skip to the beginning of the images gallery
PRESUHN, Emil. 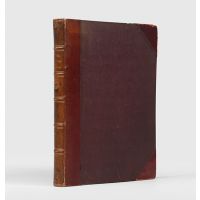 The German archaeologist Emil Presuhn (1844-1881), described in his preface as schuldirektor (headmaster) at Coburg, Duchy of Saxe-Coburg and Gotha, spent eight years in Italy, mainly at the excavations at Pompeii. His popular illustrated work on the frescoes, Die pompejanischen Wanddecorationen (Leipzig: Weigel, 1877), was published in Italian, French and English editions. He notes here that since the publication of the first edition, which included 60 plates only, "such remarkable and curious finds have been made again and again" that the addition of twenty plates to this second edition "hardly corresponds to the wealth and significance of the last excavations". However, while celebrating the discovery of so many startling finds Presuhn adopts the rather modern view that exposure of the site is "in a sense a second destruction of the city". He mentions the urgency of the work of recording the Roman frescoes - once exposed some "have a duration of only a few days" - and that "in vain one advises on means of conservation". Remarking that both the Italian government and German research teams employ artists to make uncoloured copies of the frescoes, he is at pains to stress that he has drafted in the Italian painter Geremia Discanno ("the first draftsman for the excavations") and the "very skillful, meticulous English lady" Amy Butts to make colour copies, his aim being to capture "the Pompeiian character with its fleeting drawing, his light, often indifferent brushwork and the rich but dull colours of fresco". This faithfulness to the originals he emphasises by noting the enhancement of reproductions in the work of other, earlier studies.

Presuhn was working at a time when the systematic excavation of Pompeii had only recently begun, in 1860, with the appointment of Giuseppe Fiorelli, "the first person to actually implement a rigorous method of excavation and recording" (Estelle Lazer, Resurrecting Pompeii, 2009, p. 286). Fiorelli and his successor Michele Ruggiero were aided by the German art historian and archaeologist August Mau (1840-1909). This is a significant work in the preservation of the iconography of Pompeii, remaining the only source for many frescoes that have since been lost.

12 chromolithograph plans after Presuhn and 68 similar plates by Victor Steeger after Geremia Discanno and Amy Butts, printed by J. G. Bach of Leipzig.