Skip to the beginning of the images gallery
HOLIDAY, Billie. 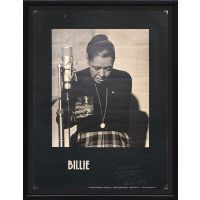 Emotive poster of the legendary singer, inscribed lower right by the celebrated bassist and photographer, Milt Hinton, "To Jeann Failows, thanks for your loyal support of jazz, as ever your Pal, Milt "Judge" Hinton, '82", and adding a sketch of a double bass.

Hinton's New York Times obituary noted, "He earned his nickname, the Judge, because he would invariably be the first to arrive at a recording session and the other musicians took to greeting him when they showed up with the punch line of an old joke, 'Well, good morning, Judge!'" (New York Times, 21 December 2000, retrieved 17.06.19).

From the collection of Jack Bradley, photographer for Louis Armstrong; Jeann Failows was a friend of both Armstrong and Bradley, and the link through whom they originally met. She was a columnist for the Canadian jazz magazine Coda and is described by Dan Morgenstern as, "a very special lady... (Incidentally, in those days, women on the jazz scene were generally much hipper than the men - musicians, of course, excepted.) Jeann, who'd been a WAC during the war and worked in publicity (she promoted a now exceedingly rare paperback called To Be or Not to Bop, an informal history of bebop by a young man named Nard Griffin, had done work for Musicraft Records and produced jam sessions at various venues, including the Club Harlem on 145th Street), was a member of Armstrong's inner circle. At the time I met her she was entrusted with Louis's voluminous fan mail from all over the world" (Living with Jazz: A Reader, 2006).

Bassist Milt Hinton (1910-2000) "was also a considerable photographer and, with his book Bass Line, the author of a unique jazz social history" (Val Wilmer, The Guardian obituary, 16 January 2001, retrieved 14.06.19). This is an arresting image of Lady Day - hair pulled back, glass in hand, head bowed, listening to a playback - captured by Hinton at one of her last three recording sessions, for Columbia, in early March 1959. at which Hinton played bass, and which featured Billie with orchestra.