Skip to the beginning of the images gallery
COWARD, Noël.

An Intimate Comedy in Three Acts.

London: William Heinemann Ltd, 1930 Stock Code: 121721
£3,000.00
On display in an exhibition, not currently on premises
Add to Wish List View Wishlist
By the same author

Waiting in the Wings.

The Queen was in the Parlour. 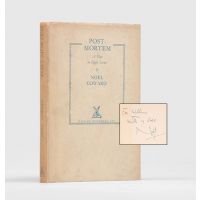 First edition, first impression. Presentation copy from the author to Laurence Olivier, inscribed on the front free endpaper: "For Larry from Noël, 1930". An outstanding association copy marking Olivier's "breakthrough" stage appearance. The distinguished theatre critic Michael Billington writes: "Olivier's early years were marked by an impatient hunger for fame, one endorsed by his dashing good looks, fashionable Ronald Colman moustache, and matinée idol presence. But his poor judgement was revealed when he foolishly forsook R. C. Sheriff's Journey's End (1928), in which he scored a great success as the war weary commander in a single Sunday night performance, in order to play the foreign legion hero in P. C. Wren's Beau Geste (1929). The former turned into a commercial hit: the latter proved a spectacular flop. There followed a period of short runs in bad choicesno fewer than seven plays in 1929from which he was rescued only by Noël Coward, who cast him as the priggish Victor Prynne in Private Lives in 1930. Olivier detested the part but later acknowledged the huge personal influence of Coward, who cured his tendency to giggle on stage, opened his mind to great literature, and 'gave me a sense of balance, right and wrong' (Anthony Holden, 63). Coward did not, however, cure Olivier of his insatiable star hunger. During the Broadway run of Private Lives (1931), Olivier was spotted by a talent scout and whisked off to Hollywood. Despite Coward's finger-wagging warnings ('you've got no artistic integrity, that's your trouble'; Holden, 165), Olivier headed west, accompanied by his young wife, with reckless enthusiasm" (ODNB). Anthony Holden gives a marvellous picture of Olivier's first meeting with Coward: "on 18 June, a note in Olivier's diary recalls another momentous appointment in that summer of 1930, which was at last to alter his fortunes dramatically: '10 a.m.: Noël Coward.' Already, at thirty, the toast of London - with Hay Fever, The Vortex and Bitter Sweet to his credit - Coward was sitting up in bed in his Chelsea home in Japanese silk pyjamas, still eating his breakfast, when Olivier arrived. Immediately calling him 'Larry', Coward told him with quiet confidence that he was about to produce his greatest success yet, a new four-handed comedy called Private Lives, and that he, Larry, could make his name with the part of Victor Prynne. Chucking 'Noëlie's around the room with excited abandon, Olivier thanked him kindly and took away the script. A few days later he was back, telling Noëlie that he would rather play the leading role, Elyot Chase. Coward laughed himself stupid. He had, of course, written the two main parts for himself and Gertrude Lawrence" (Olivier, 1989).

Private Lives - dashed off by Coward in four days while recovering from 'flu in Shanghai - opened at the King's Theatre, Edinburgh, on 18 August 1930, starring Coward and Gertrude Lawrence, with Olivier and Adrianne Allen as Victor and Sybil. It toured the provinces for five weeks before opening the new Phoenix Theatre in the West End on 24 September. It transferred to Broadway in 1931 and was a 256-performance smash. The only change in the cast for this New York run was that Olivier's first wife, Jill Esmond, took the role of Sybil - and in the present copy the part of Sybil is marked and annotated in pencil throughout, including stage directions and alternate readings, the hand certainly bearing a resemblance to Esmond's. A 1940 radio adaptation, broadcast in America, featured Vivien Leigh as Amanda.

This copy - its somewhat compromised state lending it the air of a relic - has an extraordinary show business provenance, and was presumably presented to Olivier during the West End run as Heinemann published the text one week after the opening at the Phoenix. It was to change the fortunes of one of the theatrical titans of the 20th century, Holden noting Coward's perceptive comment: "that young man, unless something goes radically wrong, will before long be acknowledged as our greatest actor".

Spine absent, some wear and a few marks to boards, pest damage to one corner with concomitant minor damage to fore corner of about a dozen leaves, touch of foxing to prelims and end matter.

Waiting in the Wings.

The Queen was in the Parlour. 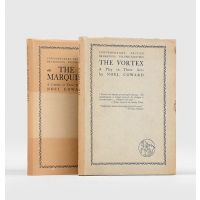