Skip to the beginning of the images gallery
(GREAT BRITAIN, Army, Home Guard.)

[With:] Photographs of the Training and Operational Tasks carried out by the Technical Companies of the 40th County of London (G.L.C.C.) Battalion, Home Guard. 1942 - 1945. 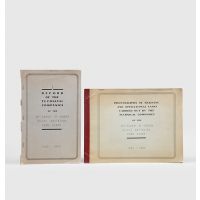 Fascinating mimeographed report on the Home Guard battalion formed by engineers from the Gas Light and Coke Company in 1942, with a volume of fine photographs. Rare, with no other copy traced in libraries or in commerce, except an ambiguous reference in the National Archives at Kew. After repair work from the Blitz eased off in the autumn of 1941, company engineers sought special permission from the War Office to form a "mobile Royal Engineer platoon based at Ilford, in which capacity they could be available to undertake specialist engineer tasks, subject to the prior claims of Civil Defence" (Introduction). Authority was granted in January 1942 and units were formed at Ilford, Westminster, Pound Lane, Seven Sisters, Goswell Road, and Heston. The report comprises a diary of events, summaries of field works, training, and inspections, letters of commendation and details of awards and social events. The photographs depict inspections by Arthur Smith and Charles Lloyd (GOC London District 1942-4 and 1944-7 respectively), bridge construction over the Roding, a Sten gun range at Chiswick, the demolition of various strong points to clear Heathrow airfield, and plans "for work carried out at Becher Street, Kensington, to demonstrate methods of placing groups of houses in a state of defence".
"From the very beginning industrial concerns made a considerable contribution to the growth of a voluntary movement The reliance upon industry did bring difficulties even if urban units invariably had greater access to convenient premises Many of the original factory units were not incorporated into local battalions initially but allowed to remain separate with the result that large numbers of men were not fully utilised in local defence plans: their only concern was the defence of their own premises. Similarly, the public utility battalions clearly faced something of a conflict of interest in the event of an emergency and were generally organised on a regional basis unsuited to any active participation in local defence. It was not long before most factory units were integrated into local defence schemes" (Beckett, The Amateur Military Tradition 1558-1945, pp. 278-9).