Skip to the beginning of the images gallery
AYROUARD, Jacques. 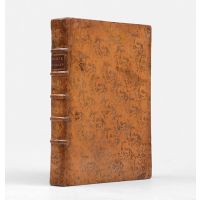 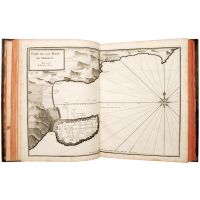 First and only edition of this uncommon collection of charts, including the first printed chart of Monaco, a large folding map of Marseilles, and accurate charts of most of the ports, harbours and bays of the region.

Ayrouard's work forms a working waggoner for the coast, recording soundings, anchorages, and pilotage notes on rocks and reefs, and includes a series of coastal profiles as a further aid to navigation. Many hydrographers later drew on this pilot, most notably William Heather, who cites Ayrouard in his New Mediterranean Pilot of 1802.

Ayrouard dedicates the work to Jean Frédérick Phélypeaux, comte de Maurepas, secretary to the royal household and minister of the navy in the court of Louis XV, who was prominent in attempts to introduce a more scientific approach to naval affairs until his exile in 1749 for writing derogatory epigrams about the king's mistress, Madame de Pompadour. The Conseil de la Marine, for whom this work was apparentlyproduced, wasfounded in 1720 as a central depository for maps, plans, journals, and memoirs relating to navigation. The hydrographer Ayrouard is unknown beyond the brief details he gives on the title where he describes himself as "Royal pilot of the King's Galleys", and explains that he prepared these charts on voyages he undertook on the coast, leading him to add further pilotage notes for the safe entry into certain of the harbours and roads ("avec les Remarques necessaires qu'il faut observer pour l'entrée á Certains Ports et autres Endroits"). Similarly, Louis Corne, the engraver of these superbly detailed charts, was known to Tooley solely from this work. It is possible that this was a local production, perhaps in Marseille, hydrographer and engraver brought together under the aegis of the Conseil de la Marine to produce this pilot for the benefit of visiting French naval ships. Scarce: Library Hub records just six copies outside France.

Quarto (340 x 270 mm). Contemporary calf, gilt arms to both boards of Charles-Eugène-Gabriel, marquis de La Croix de Castries, secretary of state for the navy from 1780 to 1787, and after 1783 marshal of France, rebacked with the original spine laid down, new red morocco label, raised bands, floral and foliate devices in the compartments, French fillet gilt panel to the boards, double rule edge-roll, marbled endpapers.

A little rubbed, slight streaking on the boards, light toning, some offsetting and occasional spotting, but a very good copy.