Skip to the beginning of the images gallery
MEDINA, Pedro de. 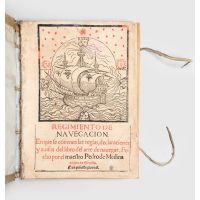 Very rare first edition of Medina's great navigational treatise, an appealing copy in contemporary vellum. Praised for its fine woodcuts, which are among the earliest to depict man's use of astrolabes, the Regimiento offers the essentials of seamanship in a practical format, and was intended for ship-born pilots; Francis Drake carried a copy during his circumnavigation. It is the natural successor to Medina's more theoretical Arte de navegar (1545).
At the time of publication Pedro de Medina (1493-1567) held the role of royal cosmographer, having previously served for a time as tutor to the ducal house of Medina Sidonia, where he had benefitted from access to the library's valuable repository of scientific works. The publication of his first book, Libro de cosmografía (1538) earned him a pilot's license, and his subsequent career was built upon refining the instruments, books, maps, and training relied upon by those voyaging to the New World. His works were as popular as they were innovative; a second edition of the Regimiento was printed in Seville by Simón Carpintero in 1563, and the Arte circulated in a number of editions and translations.
The Regimiento is here bound as often without the two leaves of correspondence with senior cosmographer Alonso de Chaves. We can trace just four institutional copies of the first edition at the New York Public Library (without the same leaves), Yale, National Library of Scotland, and Universitätsbibliothek Rostock. Four appear in auction records: Christie's 2007 (Streeter copy); Sotheby's 1985; Sotheby's 1951 (described as the "second edition" but dated 1 December 1552, totalling 44 leaves, the same copy appearing at Harmsworth also in 1951); Maggs 1928 (containing, "in facsimile, the two leaves which are usually missing at the beginning of the book, consisting of the text of Medina's letter to the cosmographer Chaves, and the reply").

44 unpaginated leaves, collates [A]<sup>2</sup>, a-e<sup>8</sup> [-a1, -a2], f<sup>4</sup>; bound without the third and fourth leaves as often, comprising the letter addressed to Alonso de Chaves and his reply. Printed in red and black. Woodcut title vign

Small faded red stamp to title page verso (the initial "B" crossed with an unfurled banner, lettering illegible); early ownership signature to same ("Josep[?]"); the occasional early ink annotation and underlining to text (such as c5v and d8v, evidence of having been cropped in the binding process). A little skilful refurbishment to vellum, relined to style; a few small, discreet paper repairs, some faint patches of damp; the contents lightly browned, a couple of tiny wormholes not affecting text; overall a very good, well-preserved copy.