Skip to the beginning of the images gallery
GORDON, Charles George.

Together with two other related letters. 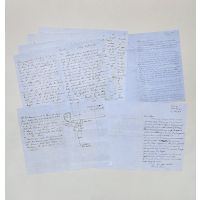 An unusually long letter, in which Gordon goes into great detail about the difficulties of African exploration, revealing his exasperation at Lucas's behaviour, and his frustration at Lucas's unwillingness to heed the advice of someone far more experienced in African travel.

Louis Arthur Lucas (1851-1876) was the only surviving son of Philip Lucas, a prosperous Manchester merchant. Cushioned by his father's wealth, Lucas travelled in Switzerland and the United States, until a trip to Egypt in 1873 excited his interest in Africa. Despite contracting typhoid fever on that first trip, Lucas planned to explore the Congo Basin with Arthur Freeman, formerly a gardener at the Royal Botanical Gardens at Kew.

For this he would need the authorization of Colonel Gordon, governor-general of the province of Equatoria, in the south of Egyptian-occupied Sudan, since 1873. Lacking African experience, Lucas found it difficult to get a letter of introduction, but he went to Khartoum anyway, without informing Gordon of his intentions. He and Freeman arrived at Lado in 1876 having already spent most of their money and with no ideas of the difficulties awaiting them.

Despite the poor report he had already received of Lucas, Gordon was short of help from European visitors and was initially welcoming. He thought Lucas might be persuaded to serve at one of the local stations or to explore Lake Albert on his behalf. But Lucas proved to be - as Gordon characterizes him in the letter - "blindly obstinate and 'un vrai Anglais'".

In his long letter, Gordon sets out difficulties in African exploration of which Lucas seemed blithely unaware: the hostility of the natives; the untrustworthiness of Lucas's servants; the expense of travel; the shortage of food; Lucas's own susceptibility to disease. All these problems were familiar to the likes of Stanley, Livingstone, and Harry Johnston, but not to Lucas.

Another of Gordon's political imperatives was to suppress the flourishing Equatorian slave trade. One way of doing this was to induce the Arab former slavers of Zanzibar to supply porters for European explorers. (There was a good deal of moral ambiguity in the policy, as virtually all porters were slaves.) Gordon writes that he had advised Lucas to go to Rumanika, where he could find some Arab porters from Zanzibar. He later states that he had recommended Lucas to write home for 3,000 to be placed on account in Zanzibar in order to reorganise his expedition from there.

At the end of the letter Gordon draws a detailed map of the various stations between Victoria and Albert lakes, perhaps with the unspoken intention that Lucas's cousin would send someone out to fetch him home.

Together there are three letters: the earliest dated (24 June 1876) is from Lucas to Gordon. Gordon had objected that Lucas had abandoned two sick Egyptians accompanying him to Dufile. In his letter Lucas explains that "I thought my two servants had nearly recovered when I last saw them, and I said 'they would come on with the baggage' as they said they wished to dose themselves", and states that he simply cannot afford to repatriate them. He also asks Gordon for the loan of 350.

On 28 July 1876, Lucas himself writes to his "brother", announcing his safe arrival at Magungo. We identify "Alfred", the ultimate recipient of these letters, as Emil Alfred Jacob Behrens (1850-1931), only surviving son of Louis Behrens, a successful Manchester cotton trader. The Behrens family were connected to Lucas through the marriage of his aunt Anne to Louis's elder brother, Salomon Levy Behrens, one of the earliest and most successful Jewish immigrants in Manchester. Emil, familiarly known as Alfred, had two younger sisters, Helen (Nelly) and Edith. An only child, Lucas evidently treated Behrens and his sisters as his surrogate siblings, referring to his "sisters" awaiting a letter from him. "It is quite impossible to say when you will hear from me again", he tells Behrens, a prophetic sign-off.

Despite continuing to pester Gordon with demands, Lucas ignored his advice to go to Zanzibar. By the end of August he and Freeman were both sick and returned to Khartoum. Freeman set out for Cairo but died at Berber. Lucas became delirious, running around naked and shouting. He recovered in Khartoum and started back to England, but died en route. He was buried at Jeddah.

It is plausible to assume that Gordon did not send his own letter at the time of writing, only forwarding it, together with the two related letters, after Lucas's unfortunate death that year, as a retrospective justification of his conduct towards Lucas.