Skip to the beginning of the images gallery
(GATLING, Richard J.) 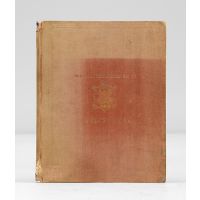 First edition. Engraved bookplate; "Compliments of the Acting Chief of Ordnance, U.S. Army" to the front pastedown. Two 2-page autograph letters signed on Gatling Gun Company stationery from Richard J. Gatling to Edgar T. Welles, son of Gideon Welles Civil War Secretary of the Navy, and secretary and treasurer of the Gatling Gun Co. In the first, dated 4 August 1885, Gatling asks Welles to join him at the Larkin House, Watch Hill, Rhode Island, where he is staying, at his wife's insistence, for his health; "I have a good many things to talk over with you - more than I can write - and I want you to also to meet Col. Prince Col. Frederick W. Prince, Civil War artillery veteran who joined Gatling in 1885 He will, I think, be a good man to work up state orders." The second, dated 21 October 1886, carries a note of urgency, perhaps even desperation; "The hands at the Armory who make Gatling Guns, are about out of work and unless we can get some orders for guns soon, they will have to be discharged. If this is done it will be bad for us, for in the event we should get large orders hereafter, it would be difficult to get green hands to make guns so as to pass inspection." Gatling despatches Welles to go Washington, "the earliest day possible & see Genl. Benét Stephen Vincent Benét, Chief of Army Ordnance, and don't take 'no' from him, but insist on his giving us an order for the 23 guns ordered by the States, & which Col. Prince procured the orders for at our expense " and while there he should "see Commodore Sicard Montgomery Sicard, Chief of Naval Ordnance; and Comander Folger William M. Folger, Inspector of Naval Ordnance, Annapolis who is now in Washington. The new war ships & monitors will ere long need Gatlings & it would save time if the Navy Dept. would order them now." Both letters a little browned, and with creases from postal folding, but very good, and with excellent content. Additionally inserted is a superbly-preserved contemporary price-list for Gatling Guns and ammunition for New York dealers Hartley & Graham, featuring a large engraving of a Gatling "with positive or Accles' Feed." Altogether a splendid assemblage.

2 photogravure plates of the gun, 19 lithographed target plates, and 3 schematics, tables to the text.