Skip to the beginning of the images gallery
WINGATE, Orde Charles. 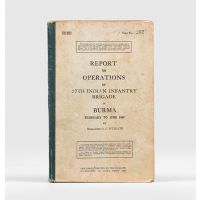 First and only edition, number 162 of 200 copies printed, of this secret and highly controversial report, withdrawn and redacted shortly after publication. Rare: Library Hub lists the IWM copy only, with the note "back pocket empty"; WorldCat shows only a reprint of 1984 in the library of the Australian Defence Force Academy. This copy with a cyclostyled "Note by H.E. the Commander-in-Chief" (Auchinleck), tipped to the title page, and the contentious passages thoroughly blacked out (a transcription of the obliterated portions is laid in). Auchinleck's note begins: "I wish to emphasize that this report is the report of the Commander 77 India Infantry Brigade to the Commander 4 Corps. It contains opinions with which I am not necessarily in full agreement. Certain remarks which are unsuitable in a report of this nature have been deleted. While passages of questionable propriety remain, I have decided to sanction a limited distribution in order that Commanders should have without delay the benefit of the great quantity of valuable information which it contains".

Wingate's report on Operation Longcloth, the first operation of the Chindits, was to become one of the founding documents of long range penetration. The first incursion into Burma had three objectives: to cut the railway line between Mandalya and Myitkyina; to harass the Japanese in the Shwebo district; and to cross the Irrawaddy and cut the railway between Mandalay and Lashio. They were successful in the first objective, and Japanese reaction to their presence indicates a degree of success in the second. However, at the railway line, two columns were ambushed and incurred heavy casualties. Wingate ordered a general dispersal and retreat back to India. They had spent twelve weeks in the jungle and marched almost a thousand miles; their losses were 833 out of 3,000 men. Wingate saw the operation as a failure, but, though it lacked material results, Longcloth recast future strategic thinking. It had been shown that the British could attack in the jungle, an alien environment for them, and take the war to the Japanese.

According to Peter Mead, a former officer on Wingate's staff, "Wingate's report on the operation was written between the end of May and the middle of June 1943, in the 19th Military Hospital, Imphal Sheets were typed and cleared daily with Gen. Scoones, his corps commander, who subsequently approved the report as a whole. Wingate interpreted this approval as conferring the right to obtain a printing and to show it at his discretion although he arranged for the Government of India Press at New Delhi to print the report he seems to have made no approach to GHQ on the matter; typed copies of the report had previously been sent by Scoones to the commander of Eastern Army, however, and thus found their way to GHQ; the latter did not like it. By 7th July, however, the report had been printed, proofs read by Wingate at New Delhi and copies of the corrected edition sent to several people. GHQ promptly withdrew the report, to be issued later with offending passages censored in black, but Leo Amery's uncensored copy was the important one, for Amery sent it to Churchill" (Mead, Orde Wingate and the Historians). Churchill "suddenly saw a gleam of light in what he had characterized as a 'welter of lassitude and inefficiency' Wingate was flown home, met Churchill, and was added to his entourage for the voyage to the Anglo-American summit at Quebec in August 1943 (the 'quadrant' conference)" (ODNB), where he sought to persuade the Allied chiefs of the soundness of the long range penetration concept.

Large folding coloured map in end-pocket, diagrams and plans to the text.

Laid-in newspaper clipping Sir Robert Thompson and Brigadier Peter Mead's letter to The Times, 31 July 1978, regarding the treatment of Wingate in Kirby's War Against Japan. Extremities rubbed and bumped, covers marked, inner hinges superficially cracked at ends, but holding, occasional pencil-marks to margins, folding map creased at edges, the image unaffected. A very good copy of a book with a high rate of attrition.