Skip to the beginning of the images gallery
MONCADA, Sancho de. 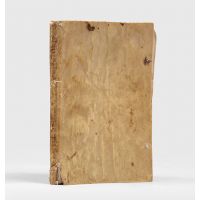 Very rare first edition; each discourse with a special title-page and continuous pagination and signatures, except for the seventh (in two parts) and eighth which have separate pagination and signatures. Moncada's importance as a political economist was assured by this work, which was probably presented to Philip III in 1618. In it, Moncada, who was strongly influenced by the Italian writer Giovanni Botero (1544-1617), outlines a strong protectionist policy. A rich apparatus of citations, which includes the names of Covarrubias, Vitoria, Soto and Azpilcueta Navarro, accompanies the text.
Sancho de Moncada (fl. early seventeenth century) "lectured on theology in the university of Toledo, and published, in 1619, eight Discursos on various economic subjects, which were the uncompromising expression of the prohibitive tendencies then prevalent in Spain, and, consequently, obtained a wide celebrity among his countrymen... Moncada does not admit for a moment that the wars abroad, the system of laws, the excessive number of idle persons, the debasement of the currency, etc., could fairly be looked upon as responsible for the depressed state of Spain: 'the misfortune of Spain flows from the trade with foreigners, who carry away our raw material and our silver.'... His only remedy is the prohibition of exports of raw materials and precious metals, and of the imports of manufactured articles, enforced by the penalty of death pronounced against smuggling, and the delivering to the Inquisition of all persons accused of exporting money. " (Palgrave II, p. 783).
"Moncada follows scholastic doctrine in attributing the rise in Spanish prices to the influx of gold and silver from America - 'the abundance of silver and gold has caused a fall in their value and consequently a rise in the things that are bought with them' - but thinks that the main reason for the poverty of Spain lies in the fact that her commerce has fallen into the hands of foreigners He held that there was a science of government whose laws should be learned by every administrator and suggests that a chair of 'politics' should be founded in all universities, and that an entire university devoted to the arts of government should be established in Madrid" (Grice-Hutchinson, p. 141).
"Quesnay and George were preceded in their advocacy of a single tax on land or on agricultural produce by Moncada, who thought it right to 'tax Nature, who is never weary, and not human industry', and who therefore proposed to remove all taxes on industry and commerce, and to tax grain instead, raising its minimum fixed price proportionately" (ibid. p. 147).

Woodcut royal coat of arms on title and each of the eight discourses.