Skip to the beginning of the images gallery
LAVOISIER, Antoine-Laurent de. 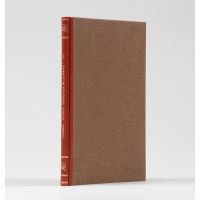 First edition, Perrot's edition I, not to be confused with the re-edition of c.1810 using a similar type (Perrot III). "De la richesse territoriale de France, which was printed in 1791 by order of the National Assembly, constitutes an extract from a larger work on which Lavoisier had been engaged since 1784 in an effort to complete and verify an analysis of national income undertaken by Dupont de Nemours. Lavoisier's main argument is that the monetary valuation of national income from different sources leads to double counting; that the only method exempt from such difficulties is that based on an estimate of annual consumption, since exports and imports in France balance one another; and that in estimating consumption allowance must be made for the variation in the budgets of different social classes. Thus he estimated that the annual per capita income of the poorest families is from 60 livres to 70 livres, but he set the value of average per capita income at 110 livres, a figure admittedly similar to that of Quesnay in his Philosophie rurale (1763). It was derived by Lavoisier from a hypothetical budget for a family of five, in which the father's consumption is valued at 250 livres (an amount equal to the soldier's pay in the French army) and the mother's consumption and the aggregate consumption of the children each at two thirds of the father's. For a population of 25,000,000 he deduced a total consumption income of 2,750,000,000 livres. The net national income, computed by estimating the net revenue in the various branches of agriculture, he put at only 1,200,000,000, of which half goes to the treasury in the form of taxes and the rest constitutes the landowners' rent" (ESS).
Lavoisier's modern biographer writes: "Ce pamphlet est à la fois un chef-d'œuvre de profondeur et de plaisanterie. Pour le philosophe, c'est un traité complet d'économie politique; pour l'homme du monde, c'est un conte plein de gaîté; le génie supérieur à tous a trouvé moyen de se mettre au niveau de tous'"(Jean-Pierre Poirier, Lavoisier, p. 281; see op. cit., pp. 278-85). The work was reprinted after the Terror, to which Lavoisier famously fell victim, in Collection de divers ouvrages d'Arithmétique politique (1797).