Skip to the beginning of the images gallery
[LLANOS Y GUTIERREZ, Valentin Maria.]

A Spanish Tale. By the Author of "Don Esteban." 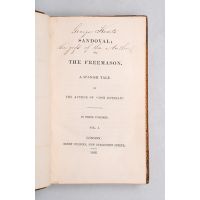 First edition, presentation copy to George Keats, inscribed by the author, his brother-in law, "George Keats, the gift of the author", on the title page of all three volumes. George Keats (17971841), younger brother of the poet John, never met Llanos, but was pleased to have as "a friend and brother" a man of letters, and enjoyed both his published novels.
Valentin Maria Llanos Gutierrez (17951885) was an exile from King Ferdinand VII's reactionary Spain since 1814 and was in Rome in 1821 when John Keats was seeking convalescence there. Being interested in England and English writers, Llanos gained an introduction to Keats, met and spoke with him occasionally, and is said by the novelist Gerald Griffin to have conversed with him just three days before his death. Llanos then left for England with a letter of introduction from Keats's friend, the artist Joseph Severn, who was with Keats at the end. In summer 1821 Llanos met both Keats's lover Fanny Brawne and his youngest sister Fanny Keats. He married Fanny Keats in 1826, the year of publication of this title. Charles Cowden Clarke, the schoolteacher of the Keats brothers and a significant literary patron of the poet, remembered Llanos as "a man of liberal principles, very attractive bearing, and of more than ordinary accomplishments." He wrote three novels, Don Esteban (1825), Sandoval (1826) and The Spanish Exile (written 1828, never published). On Ferdinand VII's death in 1833, Llanos and Fanny went to Spain, never to return to England. In 1835 he became secretary to Spain's leading minister Juan Alvarez Mendizabal, also a former London exile, rising to Spanish consul of Gibraltar. In 1861 he and Fanny retired to Italy, where he reunited for a time with Severn, before returning to Spain in 1864.
George Keats, John's favourite brother and the recipient of many of his most important letters and poems, emigrated to America in 1818, setting up a sawmill venture in Louisville, Kentucky. His first years of business were unsuccessful (he is believed to have been swindled by the naturalist John James Audubon), and he visited England again briefly in January 1820 to collect his share of his deceased brother Tom's estate before returning to America, where he remained. His copy of Sandoval (this copy) is recorded by Crutcher in his list of the books in George Keats's library. It is presumed that Llanos and Fanny sent his copy to him in America, though it is possible that the book was entrusted to George Keats's wife Georgiana when she visited England in May 1828.