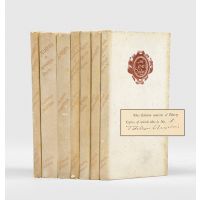 The publisher's retained first copies of the rare deluxe japon issue of seven titles in Unwin's Cameo Series, each copy number 1 of 30 numbered copies only printed on japon vellum, three signed by the publisher on the colophon; all from the personal library of Thomas Fisher Unwin (1848-1935).
Unwin's Cameo series of poetry was a distinctively packaged sequence of books that caught the attention of the public and attracted imitators. Several of the titles included here constituted meaningful first appearances: Wordsworth's Grave (first), Mireio (first UK), Mariana (first English), and The Son of Don Juan (first English). Also included in the series, which ran from 1890 to 1902, were titles by Henrik Ibsen, Amy Levy, Richard Garnett, W. B. Yeats, Edward Willmore, and Alfred de Kantzow.
Three pieces of ephemera are laid in: a William Watson poem, "Liverpool", clipped from a newspaper dated 23 October 1908; a small 4-page booklet, sewn at the fold, advertising Unwin's Century Illustrated Monthly Magazine; and a typed 14-line poem "To Madame Duclaux (A. Mary F. Robinson)", dated 9 January 1926 and with the autograph of Irwin F. Smith.

Illustrated frontispiece to each volume.

Some light mottling to covers but generally in very good condition indeed, all sound and internally clean.