Skip to the beginning of the images gallery
(NAVAL SIGNALS.) 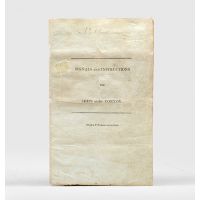 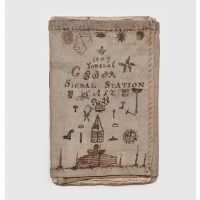 Extremely uncommon set of instructions for merchant ships sailing in convoy during the Napoleonic Wars. Library Hub shows a single copy dated to 1802 at NMM, WorldCat adds copies identified as 1804 at NYPL and Princeton, another lacking self-wraps - "1800s" - at the Peabody Essex and NYHSL, another similar at the State Library of New South Wales, 1802, and copy misidentified as "1700s" at the Navy Department Library History and Heritage Command. These instructions were issued under the condition of secrecy, were subject to supersession after the conclusion of a given mission, and were flimsily produced, all of which militates against their survival. Furthermore the act governing the conduct of merchant masters in convoy, relevant passages of which are reprinted on the last leaf of these instructions, specifically stipulates that in the case of the threat "of being boarded or taken possession of" the captain must "destroy all instructions confided in him relating to the convoy".

This set is numbered 59 in manuscript on the front wrap, and was issued on 26 July 1808 by Capt. Archibald Collingwood Dickson on board Orion, 74, to Thomas Mullett commanding the schooner Betsy. Interestingly Mullett seems to have been an American out of Marblehead, MA, who had served in the War of Independence under Capt. Francis Symonds in John Glover's 21st Massachusetts Regiment. Dickson was the son of Admiral William Dickson, he had received his first commission in 1791, serving as lieutenant on board the Royal George on the 1st of June 1794, promoted post-captain in December 1796. In 1799 he accompanied his father on the Monarch when he succeeded Sir Richard Onslow in command of a division of the North Sea fleet; "he afterwards removed into the Veteran, 64, and in her assisted at the capture of the Dutch Rear-Admiral Storey and his squadron in the Texel. He subsequently accompanied the armament sent to Elsineur to give weight to the remonstrances of Lord Whitworth, whom the British government had sent over to adjust the dispute that had arisen on the subject of searching neutrals supposed to be carrying supplies to the enemy. The Veteran also formed part of Sir Hyde Parker's fleet employed against the Northern Confederacy in the spring of 1801" (Marshall's Royal Naval Biography). For most of the Napoleonic Wars he Dickson commanded the Orion, here part of the Anglo-Swedish fleet confronting the Russians in the Baltic, the manuscript rendezvous instructions advising that "In case of separation before we enter the Belt Rendezvous off Dar's Head. If after clear of the Belt off Gottenburg (see James, Naval History, V, pp.111-7). The effectiveness of these methods, and the somewhat strained relations between naval officers and the merchantmen - who they referred to as "mules" - are rather well captured by Dudley Pope in one of his Ramage novels, referring to precisely this set of instructions; "In front of Ramage was a pile of twelve-page booklets the title, in small type and neatly displayed between double rules said: Signals and Instructions for Ships under convoy". In tiny type was the announcement: "Printed by W. Winchester and Son, Strand" Ramage glanced down the seven numbered paragraphs on the first page and felt the all too familiar despair. Number III for instance: "No signals are to be made by the ships under convoy besides those appointed by the Commander thereof". What would happen, in fact, was that proper signals made by the commander would be ignored and incomprehensible flag signals would be hoisted by mules. Days later it would transpire that the mukles were using an old signal book from some past convoy" (Ramage's Trial).

6 pages of flag instructions, hand-coloured in part, a 2 pages of signals with lights, uncoloured.

Wraps somewhat browned and soiled, fold of wraps professionally repaired with japanese tissue, light browning throughout, horizontal median crease from old fold, some splitting towards the fore-edge at the crease, now neatly reinforced with tissue, about very good.