Skip to the beginning of the images gallery
NIGHTINGALE, Florence. 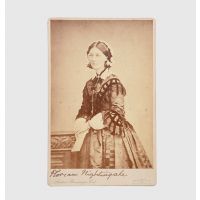 Facsimile autograph letter signed, to the Nurses and Probationers at St. Thomas's Hospital.

Notes on Nursing: what it is, and what it is not.

A superb large format signed photograph, one (and perhaps the largest) of only very few examples of a signed photographic portrait of Florence Nightingale to have appeared on the market, auction records recording no examples. There are signed cartes-de-visite at the Florence Nightingale Museum in London (dated 1861, photographer H. Lenthal) and Columbia University (dated 1867, photographer A. A. Turner), but these are smaller in size than this cabinet photograph.
This has a detailed note of provenance, having been garnered by the noted American autograph hunter Charles Elmer Rice (1862-1939), whose autograph inscription appears on the verso of the mount and below the image on the album leaf: "Signed for me on May 15th 1903 - on my 2nd visit to her, in her home No 10, South Street, Park Lane, London - just after her 84th birthday anniversary - She died Aug 13th, 1910 - in her 92nd year, Chas. E. Rice".
Dr Rice, of Alliance, Ohio, amassed an impressive collection of autographs and manuscripts, auctioned in 1917 by Henkels of Philadelphia. It comprised a "full set of the presidents of the United States, cabinet officers, presidents of the Senate and speakers of the House, signers of the Declaration of independence, members of the Continental congress, signers of the Constitution, Supreme court of the United States, governors of the states, Confederate government, and Hartford convention etc., etc." He also donated an important group of papers, now the Charles Elmer Rice Collection, to the Ohio Historical Society.
This portrait, the likeness chosen to appear on the 1975 Bank of England 10 note, is the best known and most widely circulated image of Florence Nightingale. The head-and-shoulders and full-length versions, both of which are held by the National Portrait Gallery, are the more familiar reproductions, rather than this three-quarter length image. It was originally taken in around 1856 by William Edward Kilburn (1818-1891), shortly after the conclusion of the Crimean War. "William Kilburn opened his portrait studio on London's Regent Street in 1846. He was commissioned to make daguerreotype portraits of the Royal Family between 1846 and 1852, and was awarded a prize medal for his photographs at the 1851 Great Exhibition" (National Portrait Gallery).
This exceptional artefact, zealously collected and with an uncommonly detailed provenance, attests to this remarkable woman's enduring renown. She was "a Victorian figure but, on the other hand, strangely contemporary She remains an enigmatic figure. Her sense of being 'in office' and 'out of office' reflects the frustration of a woman who sensed power but who, in the circumstances of the time, could use it only obliquely, and then chiefly by persuading men to act for her. Her remarkable practical ability, her intense religiosity, her illnesses, and her image of herself as a medieval recluse in a modern age reflect a complex character whose complexity grows with time and with the changing role of women in public life" (ODNB).

Remains of album leaf on verso of mount (where lifted), otherwise in very good condition. Presented in a dark stained oak frame with museum acrylic.

Facsimile autograph letter signed, to the Nurses and Probationers at St. Thomas's Hospital.

Notes on Nursing: what it is, and what it is not.