Skip to the beginning of the images gallery
MONK, Thelonius. 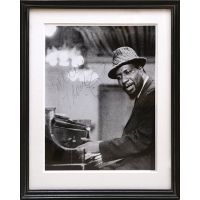 Signed "Thelonius Monk" together with a small self-portrait sketch with trademark beard and hat, it also appears that Monk tried to sign previously with a dry pen which has left some vague ink traces, and a couple of scratches to the emulsion. The date docketing verso places the signing unusually late in Monk's life; "In 1973, he vanished again. There were rumours that he was ill and had been taken in by his old friend and mentor the Baroness Nica de Koenigswarter, who lives in a big house in Weehawken, New Jersey. The rumours turned out to be true, and this is what the Baroness had to say about Monk before he died. 'No doctor has put his finger on what is wrong with him He's not unhappy, and his mind works very well. He knows what is going on in the world, and I don't know how, because he doesn't read the newspapers and he only watches a little telly. He's withdrawn, that's all. It's as though he had gone into retreat. He takes walks several times a week, and Nellie comes over from New York almost every day to cook for him. He began to withdraw in 1973, and he hasn't touched the piano since 1976. He has one twenty or thirty feet from his bed, so to speak, but he never goes near it. When Barry Harris visits, he practices on it, and he'll ask Monk what the correct changes to 'Ruby, My Dear' are, and Monk will tell him. Charlie Rouse, his old tenor saxophonist, came to see him on his birthday the other day, but Monk isn't really interested in seeing anyone. The strange thing is he looks beautiful. He has never said that he won't play the piano again. He suddenly went into this, so maybe he'll suddenly come out'" (from Whitney Balliett's obituary of Monk, reprinted in Goodbyes and Other Messages: A Journal of Jazz 1981 - 1990).