Skip to the beginning of the images gallery
POCK, Alexander. 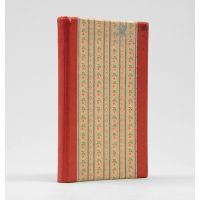 The guest-book for Werzer's famous Gasthof "zum Weißes Rössl" at Pörtschach am Wörthersee, now the home of the Brahms Haus Museum, containing six highly-finished pencil drawings by Alexander Pock: 1) Mounted officer, with New Year's wishes for 1947, dated on 26 December 1946; 2) Bust-portrait of a feldmarschal, 23 March 1947; 3) Two sailors, "on a cozy and beautiful afternoon" 20 April 1947; 4) Bust-portrait of a general "Before setting out for Carinthia" dated 11 May 1947; 5) Drum major, "drawn on a cozy Sunday afternoon" of 12 October 1947; and 6) Mounted bugler, dated 16 November 1947.

Born in Znojmo, Moravia, now in the Czech Republic, Alexander Pock (1871-1950), became one of the most popular Austrian military, genre and portrait painters of his period. He studied at the Vienna Academy under Christian Griepenkerl and Carl Rudolph Huber, showing early enthusiasm for military subjects, with a special talent for equestrian portraits. He came to the attention of Archduke Franz Ferdinand, who became an important patron, and provided many prestigious commissions for Pock. Immediately after Franz Ferdinand's assassination in Sarajevo and the outbreak of the First World War, Pock signed up as a war artist, working at the Front in Galicia, Transylvania, in the Krn (Isonzo) and South Tyrol. Pock had great facility as a sketch artist, quickly working up his studies from life into full studio paintings. His extremely naturalistic representations of horses was based on intensive studies from nature, spending many hours at the Spanish Riding School of Vienna. His clients were mainly of the court and aristocracy, especially the Bohemian nobility, and the military hierarchy, a clientele which was decimated by the war, forcing Pock to concentrate on developing new patronage among the bourgeoisie. But he never lost his love of the military and continued to produce images of the Austrian Army during the First Republic, work characterised by his painstaking accuracy, and meticulous rendering of detail, meaning that his work is considered a highly reliable source for historians of the period. Many of Pock's works are inevitably in private hands, but examples can be seen in Austrian Museums including the Heeresgeschichtliches Museum and Museen der Stadt Wien.

A little rubbed, else very good.