Skip to the beginning of the images gallery
(BANKING.) HUTH & CO. 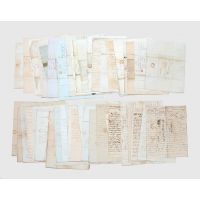 An extensive collection of letters sent to the founder and proprietor of the Frederick Huth & Co banking house, Frederick Huth (1777-1864), from his Spanish agents. Huth was born in Germany to an ordinary soldier, worked for a Spanish merchant in Hamburg, and established a business in Corunna, Spain. In 1809 he fled to England following the invasion of Spain by France, and established the Huth banking house. By 1829 Huth was acting as banker to the Spanish Queen Maria Christina and financial advisor to the Spanish government, and was rewarded with a knighthood from the Spanish crown. By the end of the 1840s his reputation in the City of London was immense, and in reputation his house stood comparable to those of Barings' and Rothschilds'. The firm was eventually wound up in 1936, absorbed into the British Overseas Bank Limited, which was later merged into the Royal Bank of Scotland.
The letters - all in Spanish, save for two in English, and two bills of lading in French - were written by company agents in Madrid, Bilbao, Santiago, Cadiz, A Coruña, Málaga, and Valencia. The letters detail the importing of colonial commodities, mainly from Cuba and the West Indies - Havana is the principle port mentioned - but also from Ecuador and Peru, including cocoa, sugar, tobacco, cinnamon, wool, and wheat. The letters focus on the minutia of business, including port fees, commissions, insurance, and consignments, but also discuss market speculation and privateering. Agents note that cocoa from Trinidad is in much demand, with the market obsessed with the colour of the beans (7 August 1825); that the colour is a big determinant of the price of wool too (3 June 1835); that the sugar of Guayaquil in Ecuador is of a superior quality (22 October 1824); that the wheat market is not a sound investment at the time due to competition in Castile. The agents also cover the risk of privateering, reporting that the Spanish privateer Zaragozana has stated that there are rival corsairs on the Cantabria coast of Spain (8 September 1826); they cover a tribunal in Havana after the ship Trinidad is captured, later reclaimed (8 March 1826); they plan a protective escort for the ship Havana (5 December 1818). Many known individuals and companies are named, including the Liverpool silversmith and jeweller John Hall & Co, the merchants J. S. Falk & Co. in Cadiz, the Riga merchant John Mitchell, and Captain Amaso Delano, who was recognized by the King of Spain for saving the slave ship Tryl in 1807.
Several of the letters can be identified as disinfected mail, showing signs of contemporary fumigation or cleansing with vinegar (without leaving any serious condition faults). Cholera pandemics in the early 19th century led to widespread treatment of mail, which was suspected of spreading the disease. Small holes were made in the mail, or corners snipped off, to allow in the fumigating gasses, as can be seen in several of the letters.
With the dissolution of the firm, the Huth company archive was broken up. The majority of the firm's archive is in University College London, housed in 275 volumes and eight boxes; a large collection of letters from Spanish merchants from 1812-1848, later letters, and general legal agreements, are housed in Guildhall Library in London; two customer ledgers are also recorded in Liverpool. See the Frederick Huth & Co. entry in John Orbell, British Banking: A Guide to Historical Records, Routledge, 2001, p. 286-287.

Occasional browning and soiling as expected, one letter with tape repair and a few others with chips including loss to writing, but overall in very good, well-preserved condition.