Skip to the beginning of the images gallery
DUFF, Archibald, Vice-Admiral. 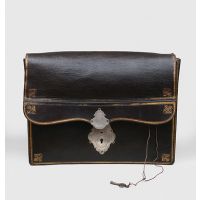 Superb early nineteenth-century letter-case formerly owned by Vice-Admiral Archibald Duff. This is a particularly large and fine example of this form of wallet or filing case, also termed a "serviette" in French, which seems to have been used widely by French officers and politicians during the late 18th to early 19th century. The museum at Malmaison holds examples that belonged to Napoleon himself, Pierre Louis Roederer, general Leclerc, and the comte d'Arjuzon, Grand Chambellan de Hollande, among others.
Duff entered the Navy on 29th June, 1788, as a Boy on board the Champion. He was at the blockade of Malta - "present with Lord Nelson at the capture, 18 Feb. 1800, of Le Généreux 74, and Ville de Marseilles store-ship" (O'Byrne) - and also in the Egyptian Campaign for which he received the Turkish gold medal. In September 1799, whilst serving as a lieutenant in Foudroyant, Duff received a gold medal from the Royal Humane Society "for his 'intrepid and manly exertions' in jumping overboard, in a dark night and saving the life of a man who had fallen into the sea" this on the personal recommendation of Nelson and the Sir Thomas Bayard, the ship's captain. Promoted commander 1802, post-captain 1806, his last command was President on the Irish Station, 1814-5, he was made Rear-Admiral of the Blue in 1840 and Vice- Admiral of the Red in 1849. He lived at Braemoriston, near Elgin and then, in 1848 he rebuilt Drummuir, which he inherited and even built his own harbour at Hopeman, near Elgin. Whether Duff obtained this case by purchase, or relieved the captain of one of his captures of it, is unknown.

Lightly rubbed and scuffed, the bottom of the "bellows" inevitably more so, through on some corners with old repairs, overall extremely well preserved, very good.