Skip to the beginning of the images gallery
FITZGERALD, F. Scott.

Tender is the Night.

A Romance. Decorations by Edward Shenton.

The Vegetable or from President to Postman. 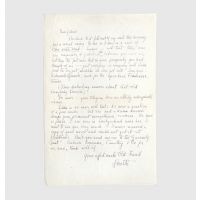 One page ALS, beginning "The check that fell out of my mail this morning...." 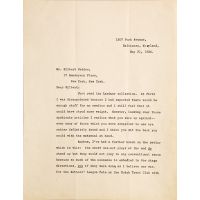 All the Sad Young Men.

First edition, first printing, presentation copy, inscribed by the author on the first blank to his sometime lover, Margaret Case Harriman, "For Margaret Harriman, who has inspired all my books this tale of our life together in Switzerland, France & U.S.S.R. from Her Chattel F. Scott Fitzgerald July 1935", together with a line clipped from a pencilled autograph letter from the author ("you are very lovely") pasted to the second blank. "In signing letters or inscribing books to women, Fitzgerald used to call himself 'Your Chattel,' a curious and seemingly inappropriate phrase that conveyed no less than the truth: that he was a virtual slave to his need to attract nearly every woman he met" (Donaldson, p. 125). Fitzgerald's use of the phrase "our life in Switzerland, France & U.S.S.R." in the inscription refers to his life with Zelda, not Margaret - much of Tender is the Night is set in the French Riviera and Switzerland, paralleling the Fitzgeralds' life there in the 1920s. Intriguingly, the front free endpaper was almost certainly torn out of this copy by Fitzgerald. It is possible that he initially inscribed the front free endpaper, as was his custom, and having made a mistake, tore it out and inscribed the first blank instead.
At the time this copy was inscribed, Zelda was being held at the Sheppard-Pratt hospital in Baltimore for psychiatric treatment, and Fitzgerald, reeling from the poor critical reception of Tender is the Night the previous year, increasingly dependent on alcohol, and in straitened financial circumstances, went through a period of intense womanizing in the summer of 1935. "From the evidence of his ledger, with its notes on each month's activities, it is clear that Fitzgerald devoted much of 1935 to the pursuit of women wherever he went, that summer of 1935, he felt compelled to win the admiration of a woman" (Donaldson, p. 127). Margaret Harriman, a writer herself, who contributed to the New York Times and later authored The Vicious Circle, among other books, was one such liaison. "According to Fitzgerald's ledger, the two of them foregathered in New York twice, in late July 1935 and in December 1936. The 1935 meeting concluded with Fitzgerald badly hungover and nursing a wounded ego from Margaret's remark that novelist Joseph Hergesheimer was 'more established' than he" (Donaldson, p. 141). In a letter to Margaret after their July meeting, Fitzgerald wrote, "I started to come to New York yesterday afternoon, to see you, because I thought you'd think I'd run out on you, instead of on my own wretched state of mind and health when I see you again I want everything to be right - even if I find you engrossed in a love affair with Geo V. and have no time for me" (Letters, August 1935). He went on to address her comment on Hergesheimer: "Of course he is more established than I am, in the same way that Hugh Walpole is more 'established' than D. H. Lawrence - established with whom? But it is simply another sort of writing. Almost everything I write in novels goes, for better or worse, into the subconscious of the reader. People have told me years later things like 'The Story of Benjamin Button' in the form of an anecdote, having long forgotten who wrote it. This is probably the most egotistic thing about my writing I've ever put into script or even said oh, there's so much to hear you say, no matter how much I'd be cynical about" (ibid.). Fitzgerald considered incorporating their affair into The Last Tycoon, with one of his working notes reading "'Put in Margaret Case episode after his wife's death'" (Donaldson, p. 141).

The Vegetable or from President to Postman.

One page ALS, beginning "The check that fell out of my mail this morning...."

All the Sad Young Men.