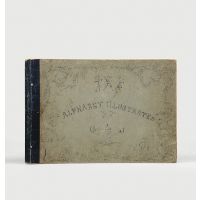 A finely executed alphabet book of captioned pen-and-ink drawings, featuring personified letters in the Victorian grotesque tradition. The drawings were executed by a talented amateur artist, carefully copied from a rare, privately-published work, The Alphabet Illustrated, by Reverend George Liddell Johnston, a feature of which is the caricatured, oversized heads of the figures in a similar vein to the illustrations Henry Holliday later produced for Lewis Carroll's The Hunting of the Snark (1876). "An artist of extraordinarily grotesque vision", Johnston (18171902) was ordained as a minister in 1849, leaving Northumbria to begin his ecclesiastical career in Exeter; he subsequently served as chaplain to the British Embassy in Vienna from 1856 to 1885 before returning to London. In 1969 a sketchbook of his work in Vienna was discovered, filled with drawings "upon which his reputation as an artist almost entirely rests". Just two copies of his Alphabet Illlustrated, published around 1855, are held insitutionally (Princeton and Cambridge).
The amateur artist who painstakingly copied the work was James Albert Buchanan "Bertie" Jay (1839-1888). The album has his ownership signature to the inside front cover dated 6 September 1858; we have been unable to trace how Jay had access to Johnston's work, which was likely published in a very small print run. Born to a wealthy Herefordshire family, Jay enrolled as a probationer at the Royal Academy in 1863, five years after executing this piece. He went on to become an equestrian painter, spending a considerable amount of time working in Germany. He exhibited at the Royal Academy (1878 and 1880), the Walker Art Gallery (1881), and three equestrian paintings of his were shown at Dundee (Oct. 1885Jan. 1886). He left left England for Australia in the summer of 1888 in pursuit of commissions from racehorse owners, and died while in Sydney, leaving behind a widow, Alice, and three daughters, one of whom, Cecil Jay (Mrs George Hitchcock), was a successful Anglo-American portrait artist.