Skip to the beginning of the images gallery
[SMITH, Charles, & Walter Harris.] 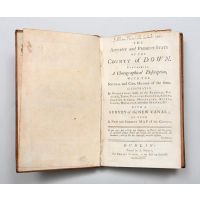 First edition of The Antient and Present State, here combined unusually with the first London edition of its parent work, A Topographical and Chorographical Survey, presented in a very well preserved plain period binding. Charles Smith (c. 1715 - 1762), the moving force behind this important book, could be described as an Irish John Aubrey, being an "itinerant enquirer" into topographical, historical, and antiquarian information for the counties of Munster. In May 1744, along with a group of like-minded individuals he founded the Physico-Historical Society in Dublin, and under their auspices published two similar works on Waterford and Cork. Following a split with the society in 1750 he continued his surveying work and issued a further volume on Kerry (accounts of Clare, Limerick, and Tipperary, were left in manuscript). ODNB describes the present work, which is dedicated to Sir Hans Sloane, as "the first county history of its kind in Ireland". It is an extensively revised version of the second work bound up here, A Topographical and Chorographical Survey of the County of Down (Dublin printed for Thomas Boreman, London, 1740). Smith is an appealing character who had an "eccentric" interest in "meteorological and natural oddities", strengthening the parallel with Aubrey, his works giving "a snapshot of the lifestyles of the protestant gentry of Munster in the middle decades of the eighteenth century and a pointer towards the social and economic improvement of the province" (ibid.).

This attractive copy is from the library of Charles William Vane, third marquess of Londonderry (17781854), with his elaborate bookplate; his arms, with hussar supporters, including his many military awards. A brave but not particularly brilliant soldier - Sir John Moore described him as "a very silly fellow" - Vane served with variable distinction throughout the Peninsular War. His Narrative of the War (1828), based on his correspondence with his half-brother Lord Castlereagh, was not uncontroversial. His dashing and dandified portrait by Sir Thomas Lawrence is at the National Portrait Gallery.