Skip to the beginning of the images gallery
GREENE, Graham.

The Basement Room and other stories. 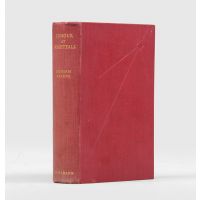 The Ministry of Fear. An Entertainment.

First edition, first impression, a superb association: Greene's personal copy, with his ownership inscription and manuscript annotations towards his screenplay for The Fallen Idol (1948), the Carol Reed-directed adaptation of the lead story in this, Greene's first short story collection. Particularly significant here is his introduction of a device which became a sub-plot in the film, the element of a pet snake.

Greene later recalled: "It is difficult to remember which of us made which changes in the original story except in certain details... The snake was mine (I have always liked snakes), and for a short while it met with Reed's sympathetic opposition" (Black et al, p. 695). Greene introduces the snake device twice in this copy, first on the front free endpaper, where he has sketched out the key plot points and chronology of "The Basement Room", and again on p. 9, where he sketches an alteration of a scene to include "dialogue with toy animal or snake in which he takes Baines' part". In the scene in the book, Mrs Baines has sent Philip to his nursery, where he ignores his Meccano set, toy soldiers, and trains, and instead broods over her harsh treatment of him and Mr Baines. In the final film version, Philip owns a beloved pet garter snake, MacGregor, which Mrs Baines secretly incinerates alive. The idea was recognised by David Lodge as "very effective on several levels - dramatic, symbolic and character-revealing". Greene has also annotated p. 17, where Philip meets Mr Baines's lover, Emmy, in the cafe for the first time, to note the casting of "Michèle Morgan" in the rôle. The French actress is best remembered for her "beautifully wistful performance" in this rôle (NYT, 16 November 1949), which was to contribute so much to the overall effectiveness of the piece. This is a wonderful evocation of Greene's working processes on perhaps the most successful film adaptation of his work, and his own personal favourite.

In May 1947, Carol Reed approached producer Alexander Korda with the suggestion that they should film Greene's novel England Made Me. Korda preferred the author's short story "The Basement Room", and Reed was convinced as soon as he read this "wonderful story". The following day he arranged a lunch with Greene to discuss the idea, whose initial reaction was surprise: "because it seemed to me that the subject was unfilmable - a murder committed by the most sympathetic character and an unhappy ending However, we went ahead, and in the conferences that ensued the story was quietly changed". Greene and Reed booked into the Hotel Metropole in Brighton, taking three interconnecting rooms, one for each of them with a secretary in the middle. Greene remembered that "it was always I who thought, 'This is hopeless'" but with Reed's persistence and assistance the screenplay began to take shape, shifting as it did so further away from the original plot line. On its release the following year, The Fallen Idol received "substantial praise and deserved it. In New York it was spoken of as having subtlety, intelligence, unforced humour and tragedy, and most all as being free from theatrical posturing" (Sherry). While working on the film Greene and Reed "developed a strong professional and personal admiration for each other" (Sherry), Greene finding in the director "a fine film and literary intelligence". Their subsequent collaboration produced The Third Man, widely recognised as one of the finest ever British-made films.

1947 was something of a banner year for Greene, and he has made further annotations to this copy around the same period as his notes for the screenplay, but for another project. In September he wrote to his lover Catherine Walston, "O the Greene stock in booming. This Gun for Hire revived at the Plaza, reprint of 19 Stories announced and huge enthusiasm for the script of 'The Basement Room'", signing off "After this burst of self-advertisement. Love, Graham". Nineteen Stories was a volume of Greene's short stories, published in July 1947 to fill a gap while he was working on The Heart of the Matter: it reprinted all eight stories from The Basement Room with the addition of eleven others, the genesis of which can be traced to Greene's annotations at the rear of this copy. He has listed five titles with word counts, evidently for consideration for inclusion; four of them were included in the published volume.

Octavo. Original green cloth, titles to spine gilt. With the previously supplied dust jacket. Annotated by the author in pencil with 10 lines on the front free endpaper; annotations and marks to 7 leaves in pencil; 7 lines on the rear free endpaper in ink and pencil with the titles of five of his short stories

Gilt a little rubbed, couple of spots of wear to edges, faint scent of tobacco. A remarkable copy in a superb example of the striking silver foil dust jacket, just a little chipped at spine ends, vertical crease to flaps, unusually well-preserved, as the fragile paper is vulnerable to chipping and the lettering susceptible to wear, and rarely encountered in such lovely condition.

The Ministry of Fear. An Entertainment.