Skip to the beginning of the images gallery
(BOOK OF COMMON PRAYER.)

and other Rites & Ceremonies of the Church, according to the use of the Church of England; together with the Psalter or Psalmes of David, Pointed as they are to be Sung or Said in Churches. And the Form and Manner of Making, Ordaining, and Consecrating, of Bishops, Priests, and Deacons.

London, printed by John Bill and Christopher Barker, printers to the Kings most excellent Majesty, 1662 Stock Code: 131958
£2,250.00
On display in 100 Fulham Road
Add to Wish List View Wishlist
By the same author

The Book of Common Prayer. 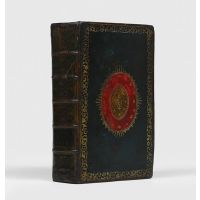 First folio edition of the 1662 Prayer Book, printed only two years after the restoration of the monarchy. The book was revised after the Savoy Conference, an attempt to effect a reconciliation within the Church of England. The bishops rejected attempts by the Presbyterians to present a new liturgy, although allowed some 600 minor changes. Unable to accept the new book, 936 ministers were deprived. The 1662 Prayer Book and its accompanying Act of Uniformity marked the start of the division between Anglicans and Nonconformists. This edition was to be the official Book of Common Prayer during the growth of the British Empire. It has been a notable influence on the prayer books of Anglican churches worldwide, liturgies of other denominations in English, and of the English people and language as a whole.
Provenance: with a set of contemporary inscriptions revealing the interlocking relations of the Royalist gentry of the English midlands. The front pastedown is cut out to reveal the original ownership inscription of John Dand (1632-1701) of Mansfield Woodhouse, Nottinghamshire, dated 1665. The rear free endpaper records the birth of George Fane, 12 January 1665, son of Sir Francis Fane of Fulbeck Hall, Lincolnshire, Royalist governor of Doncaster, and afterwards of Lincoln Castle. The witnesses included Sir George Savile, of Rufford, Nottinghamshire, presumably a relative of Dand's wife Elizabeth Savile. The rear pastedown records the birth of Kenelm Digby on 8 February 1665, witnessed by his grandfathers Sir John Digby, who had been knighted by Charles I at Newark, and Leonard Pinkney. Kenelm Digby died young; the family's next and first surviving son, John Digby (1668-1728), served as Member of Parliament for Newark, 1705-8, and East Retford, 1713-22, in the Tory interest. The Digby family resided at Mansfield Woodhouse Manor, in the same parish as Dand. The title page has the early ownership inscription of Jane Playford.
Although the 1662 Prayer Book contains the Psalms, an earlier edition of the Psalter is bound at the end (1623?, A-O6, lacking A1 title; black letter, with music; includes "A treatise made by Athanasius the great, concerning the vse and vertue of the Psalmes"; final index leaf, "A Table of the whole number of the Psalms, and also in what page you may find every of them.")

Kalendar printed in red and black; "The Psalter or Psalms of David" has separate dated title page (S4r), register continuous.

The Book of Common Prayer.