The Collected Works in Verse And Prose. 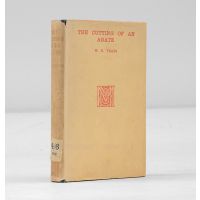 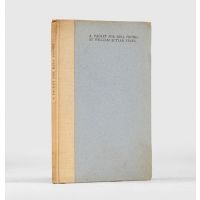 First collected edition, one of 250 first issues sets in the deluxe quarter vellum binding, with the Chapman & Hall imprint on the spines and title pages, from a total edition of 1,060 sets printed at the Shakespeare Head Press. As a production, this collected edition is regarded as a marvellous piece of publishing (Yeats himself was proud of it, remarking, "I think nobody of our time has had so fine an editionI believe it will greatly strengthen my position"), collecting, with the poet's own selection and arrangement, a substantially complete corpus (poems, plays and prose) of his first canon of work, before the finding of his later voice. Sales were slow and the majority of the edition was later issued in a secondary, cheaper cloth binding. Sets like this in the primary deluxe binding are hard to come by. This set has the armorial bookplates in each volume of Thomas Evelyn Scott-Ellis (1880-1946), 8th Baron Howard de Walden, a British peer, collector of armour and heraldry, author (producing several plays under the pseudonym T. E. Ellis), and patron of the arts. In 1914 he funded the creation, by Augustus John, of the Crab Tree Club in London (clientelle including Jacob Epstein, Walter Sickert, Paul Nash, Henri Gaudier-Brzeska, Compton Mackenzie and Jean Rhys), and in that year was one of the people "blessed" in Wyndham Lewis's vorticist magazine Blast. In 1908, the year of this set's publication, Scott-Ellis participated in the first and only motor boat race at the London Olympics.

Portrait frontispieces in 4 volumes, as issued.

Light soiling and the odd stain to spines, trivial rubbing to the tips, otherwise an excellent set, sound and fresh.