Comprising; The Essays (Translated by Cotton); The Letters; The Journey into Germany and Italy; now First Translated; A Life, by the Editor. 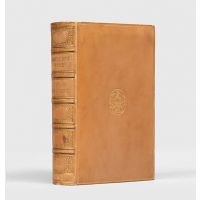 First Hazlitt edition of the French philosopher Michel de Montaigne's collected works, gathering his influential essays and letters. The present essays were originally published between around 1570 to 1592, and cover a wide variety of topics, from religion, philosophy, and classics, to solitude, age, drunkenness, anger, books, imagination, and many more. Montaigne's influence reached the likes of Francis Bacon, William Shakespeare, Blaise Pascal, Jean-Jacques Rousseau, and Friedrich Nietzsche.

From the library of Francis Darby (1783-1850), of Sunnyside, and afterwards of the White House, Colebrookdale in Shropshire. From 1810, he had oversight of the Coalbrook Foundry. A collector of contemporary art, he introduced designers in the foundry, some of them French, who started a very successful line in decorative artistic castings, not only gates, railings and stoves, but pillars for churches, fountains, and even statues. The library of Francis Darby was sold at auction by Sotheby's 15 June 1904.